How to make an impact

We speak with Tom Slingsby about SailGP’s new Impact League, Team Australia’s new partnership, and the future of sustainable sailing.

Earlier this month, the global competition SailGP announced its new adjacent competition, the Impact League. A climate-focussed competition that holds each SailGP team accountable for their actions.

During the season 2, each team will be scored on how well they mitigate their overall carbon footprint.

Running parallel to the announcement of this climate-focused competition was Australian SailGP Team confirming that the New York-based ocean conservation body Parley would be its Race For The Future Partner for the season. A decision that reflects a greater consciousness of sailing’s responsibility to the ocean and with it; raises the question of what else can be done by our community.

Sails spoke with Team Australia CEO and helmsman Tom Slingsby about the Impact League, the partnership with Parley, and the need to address our influence on the environment. 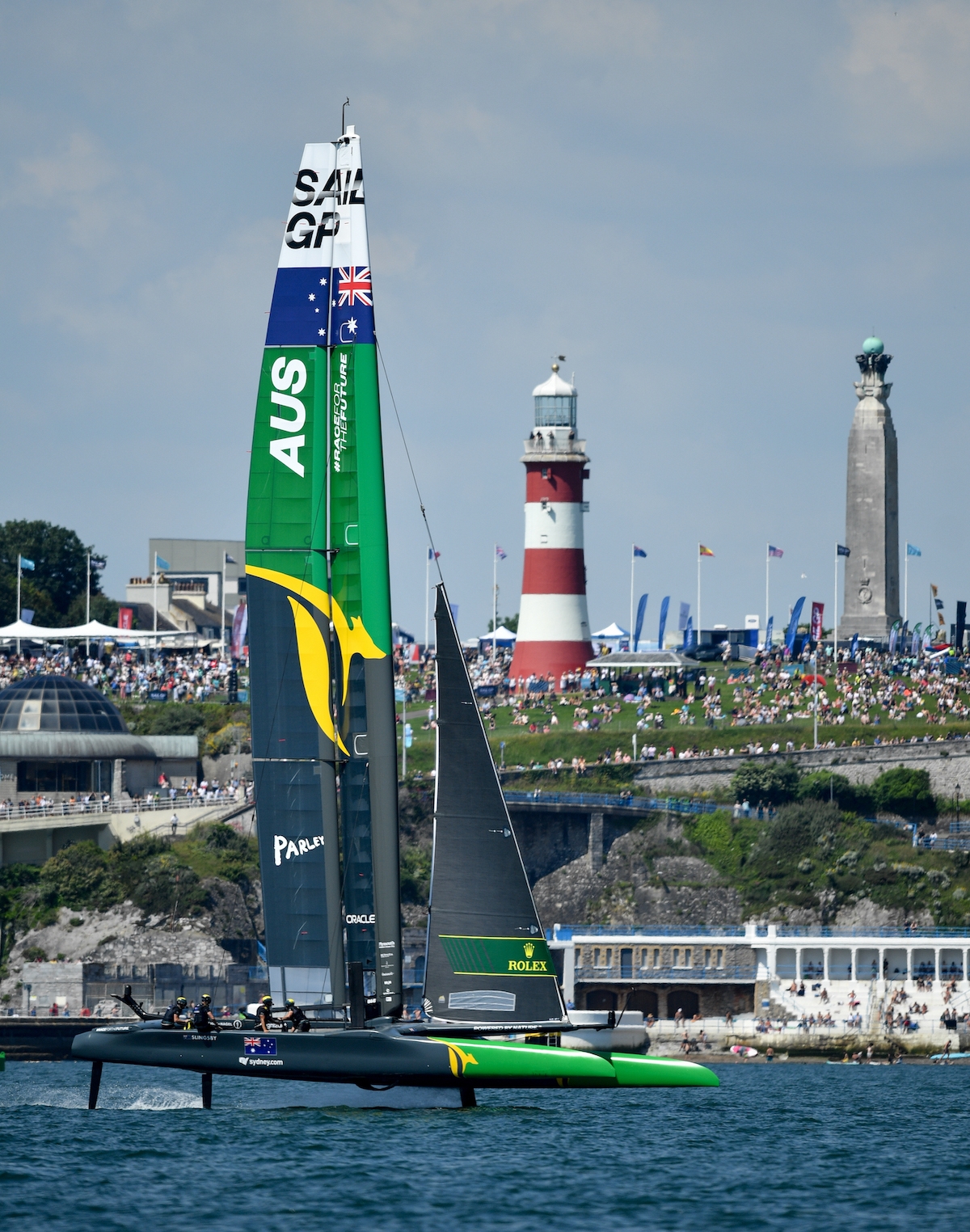 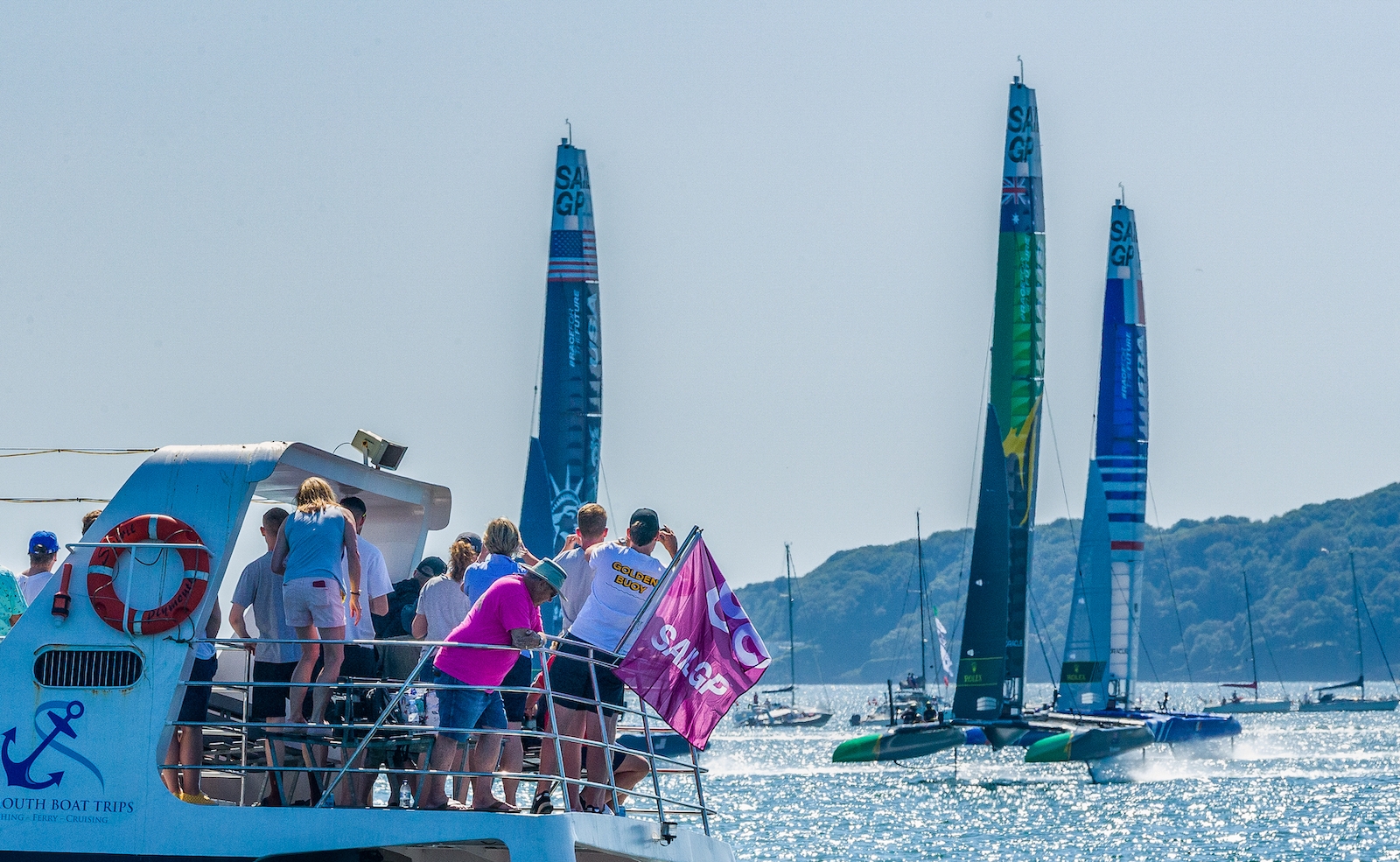 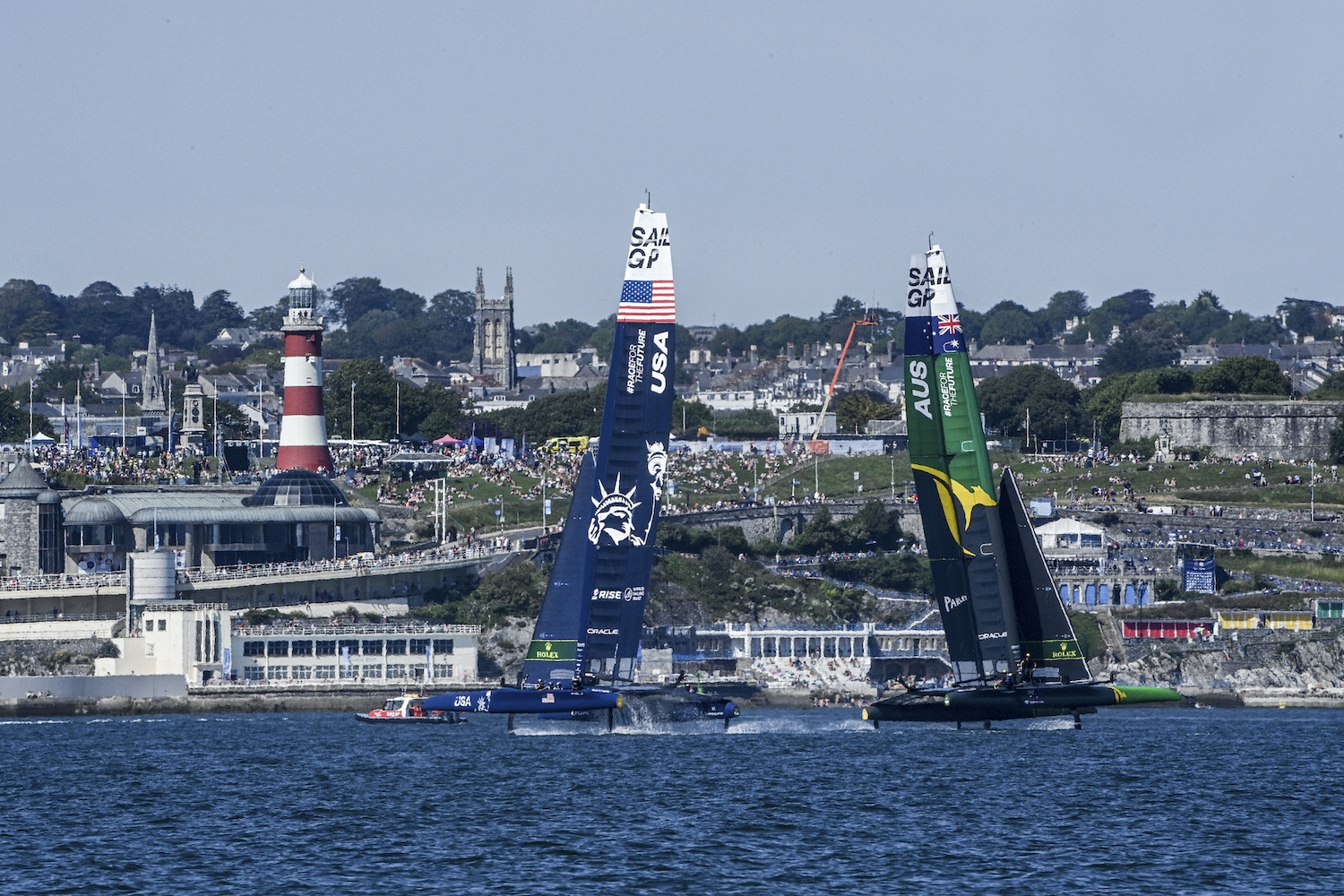 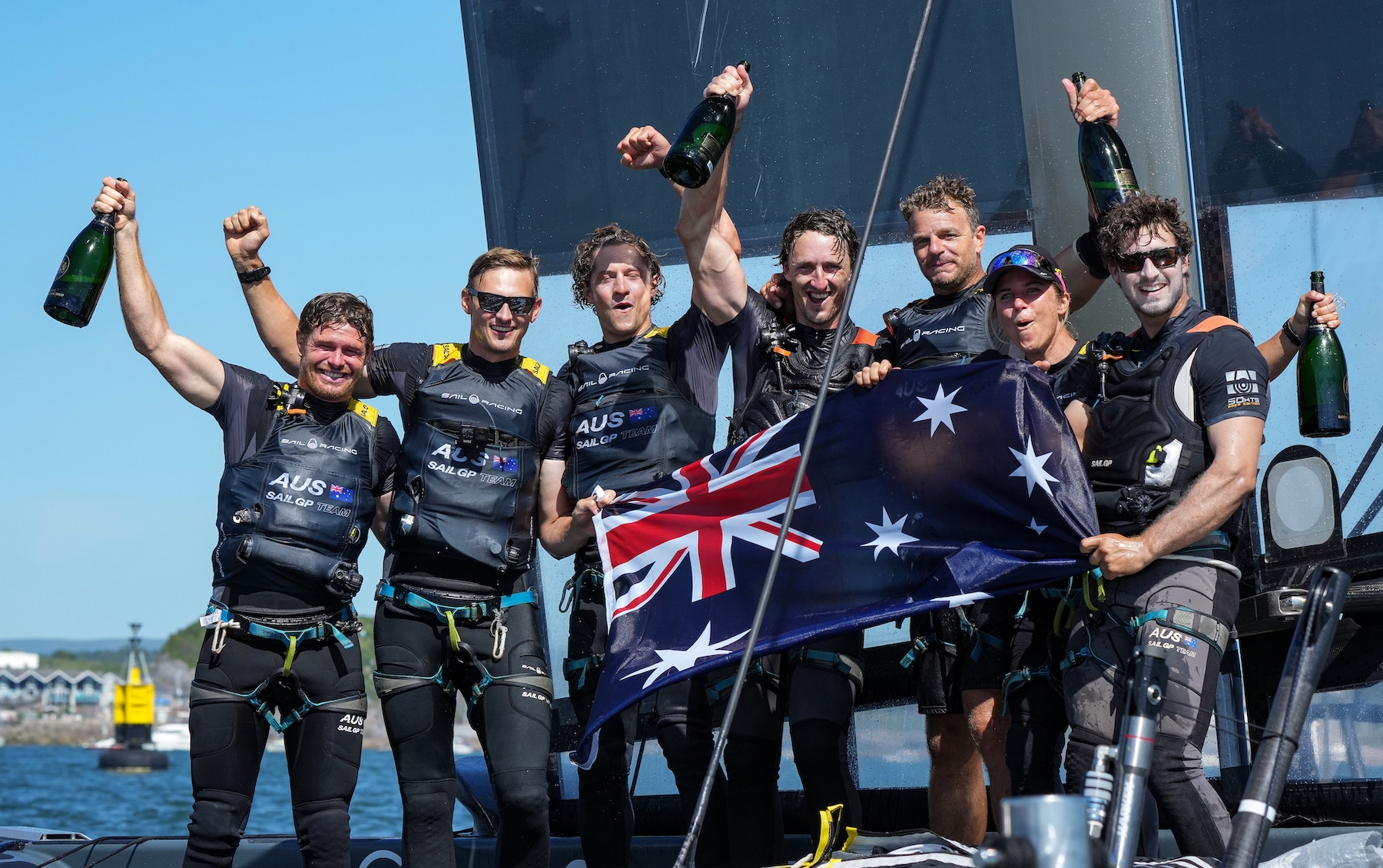 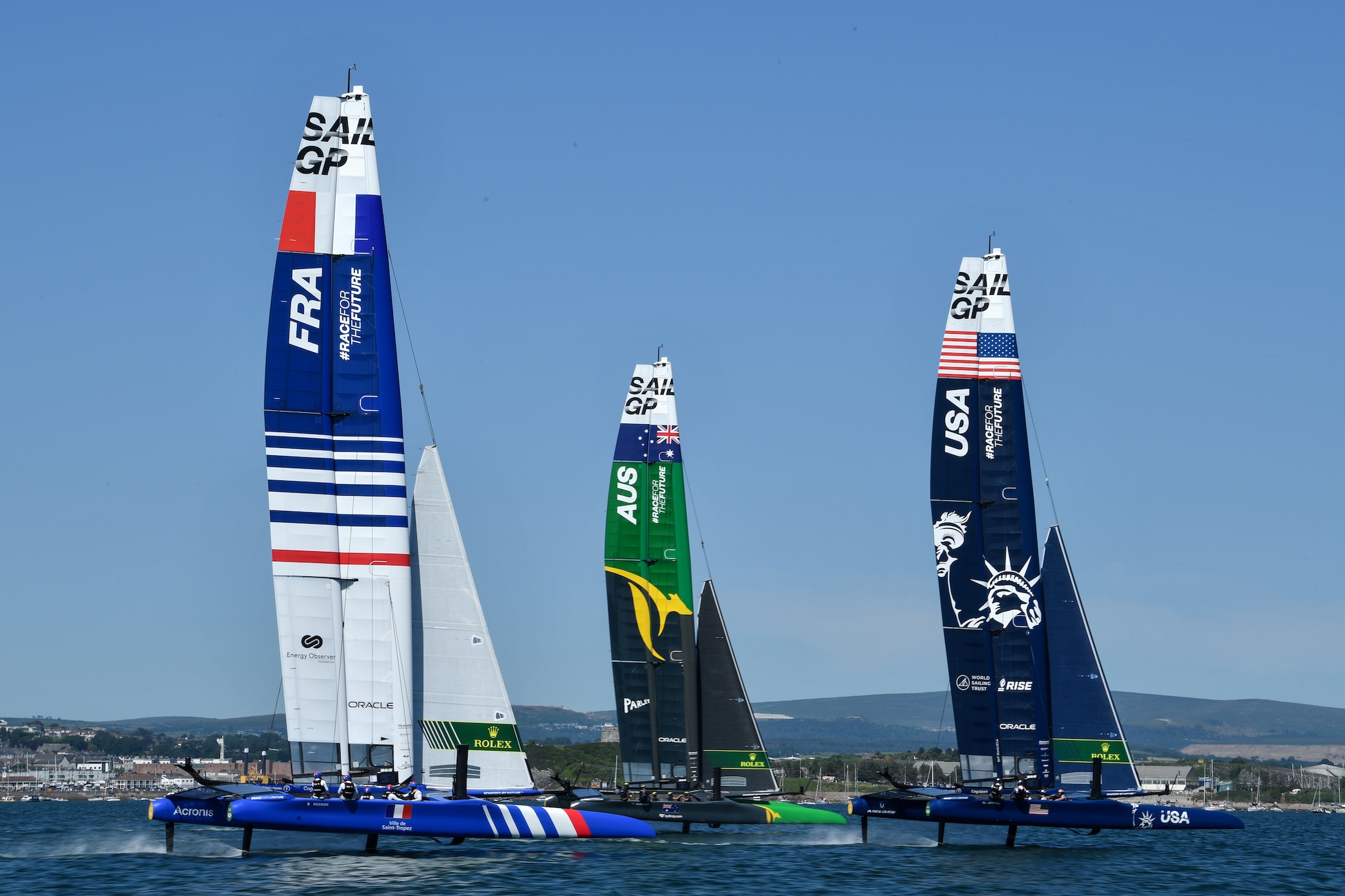 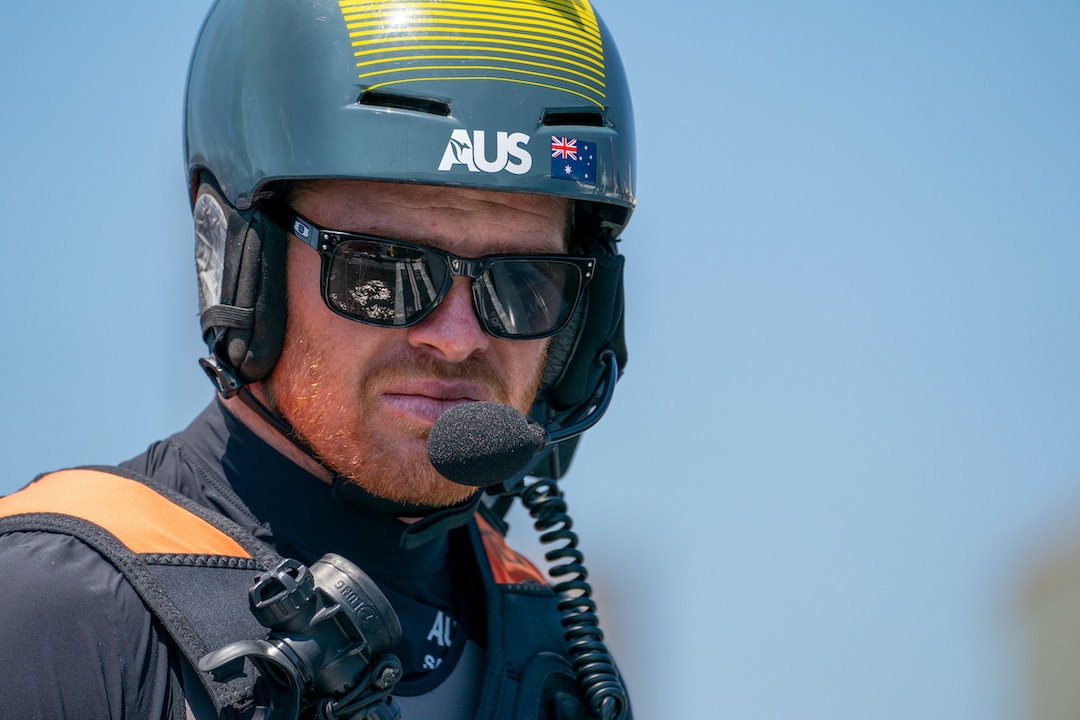 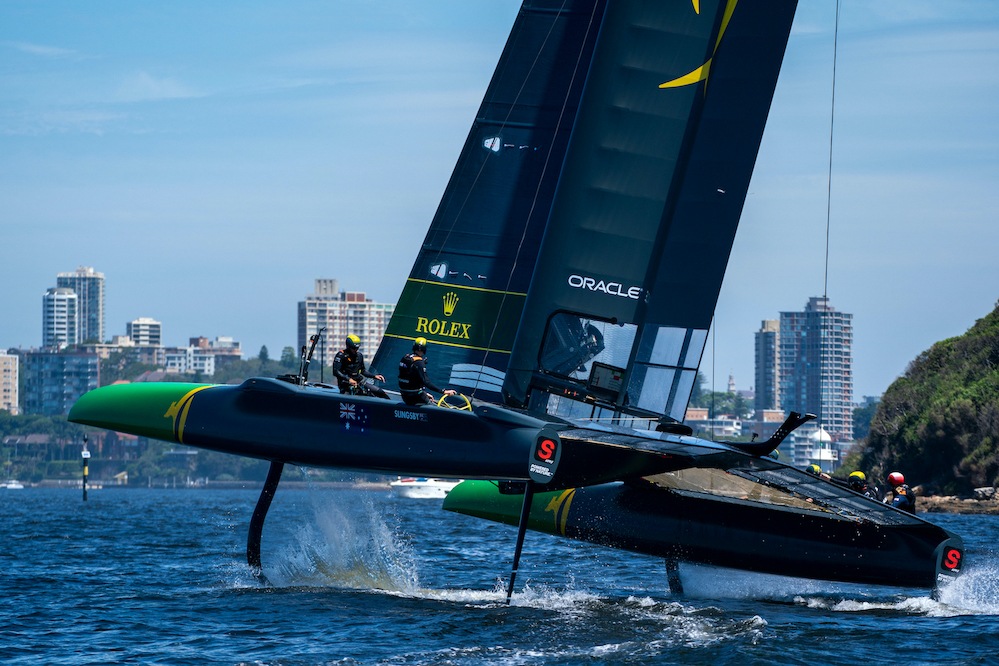 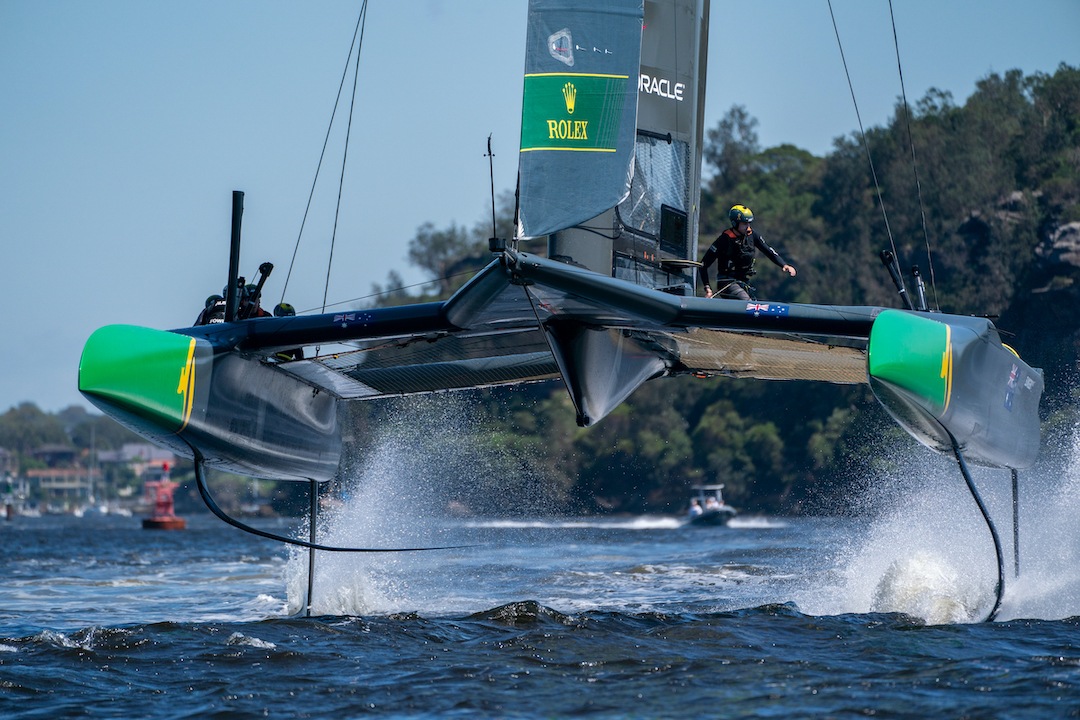 Sails: Obviously, the big SailGP news is Team Australia taking the Great Britain Sail Grand Prix. Talk to me about how you’re feeling about the result.

Tom Slingsby: We’re ecstatic about the result and the circumstances in which we were able to do it. We were missing a lot of our team members – I think we had some seven people filling in for the event. So the team is changing a lot, and we’ve got a lot of fill-ins. Two guys had never sailed an F50, and we had one who had never done flight control before. I was hoping for a top-five, and we ended up winning the event. So a bit of shock but I’m ecstatic at the way everyone performed.

We know that light airs are our weakness. And that really came out in Taranto. But also, we were a bit unlucky with the boat. We had a boat that was really playing up on Day 1 and we ended up finishing in last position by a long way. We had a pretty good Day 2 of racing, but it wasn’t enough to get up the leaderboard at all.

We didn’t want to have another last place in light conditions, so we were looking at everything; how we can improve our light air performance, what we can do on the boat, what we can do mentally, what we can do with strategy. A lot of small fixes, and we definitely improved ourselves.

The next big SailGP announcement is the Impact League, which will see teams scored for how they’re reducing their carbon footprint. Talk to me about Team Australia’s steps to accomplish this.

There are many different judging criteria for this, whether it’s the food waste, reducing plastics, recycling better, or using less fuel on the water with our chase boat. But a huge one for us is really plastics in the ocean. Before we started the Impact League, I’ve said to our team that this is a belief I hold strongly, and they all agreed that it’s something we see constantly. As sailors, we’re on the water every day and now, with hydrofoiling catamarans, you can see the water a lot more clearly.

We want to reduce the amount of plastics in the ocean and we want to try to use our platform to speak to other sailors but also, maybe all water sports. And then from that, hopefully, the general public starts listening to some of the things we’re outlining and how we can improve this.

It’s a very ambitious project that SailGP has embarked on, but it’s also very cool. And when you think about it, our boats are powered by nature and now we have full solar panel charging units – so every battery on board is charged by the Sun. It’s just really cool what [SailGP is] doing. They’re trying to be a leader, and it’s amazing how Russell Coutts and Larry Ellison are going about it. It’s not just a sailing event anymore.

Has microplastics always been an interest of yours?

There wasn’t one moment – obviously, it’s something I’ve noticed for a long time but within the last few years, it’s something that’s become more of a passion. We hear in the news about microplastics, and all it takes is to see a photo of dead birds with plastic in their stomach or a turtle stuck in a plastic pack ring, or a dolphin choking. I think that’s what really sort of hit home to me – where the animals were suffering.

I think it’s just gained momentum, slowly but surely. We’re on the water, we try not to take plastic on the water, but if we absolutely have to, we’ve got a bag for it. We travel all around the world doing events and you see some places which are beautiful with no plastic and just blue waters – it’s unbelievable. And then you do go into some venues, and it’s terrible.

I think in Australia, we’re so lucky that I think everyone has that a little bit, obviously varying degrees, but we want a tidy, clean place. The water [in Australia] is generally pretty clean. And we want to keep it that way.

Talk to me about why Team Australia partnered with Parley, specifically.

It was mainly when we dug in a bit deeper and learned about their values. Not only are they cleaning plastic out of the ocean, but they’re finding different ways for it to be recycled into something more sustainable; whatever they turn it into, it will never again be another single-use plastic. I love the idea that you’re not only cleaning, but you’re building something new. We thought that they’re a great fit.

Another thing is their partnership with Adidas. The way they’re able to use plastic in the footwear and the way they are really turning into such a sustainable company.

What’s the intention of the Australian sailing community to continue this pursuit of sustainability, particularly once SailGP is over? Emirates Team New Zealand, for example, recently announced they’re introducing hydrogen-powered chase boats. Is there anything specifically Australia is doing?

With the chase boats, SailGP has a deal with Tesla, and I think the plan is over the next coming years – I think it’s 2024 – we’ll have electric engines in all of our chase boats. So there won’t be any fuel usage at all.

I’m no expert in the area, and I’m learning as we go [laughs] but we’re having plenty of roundtable sort of discussions with Parley about what we can do, like whether we introduce electric scooters at events, so we don’t need taxis. There’s so many small things you can do that make a big difference. The answer isn’t just one person doing everything perfectly, it’s millions of people doing everything just a little better.

It’s been confirmed that SailGP will once again return to Sydney Harbour in December. Talk to me about how it feels to once again be competing and SailGP on home waters.

It’ll be unbelievable. I was as upset as anyone when I saw the Sydney event left off the calendar. We’ve been working hard to get it back on there, and we’re very proud that it has happened.

It’s good having a home event, it gives us a little advantage back where we know those waters so well. And we’ve grown up sailing there, and we’ve got our friends and family cheering us on. So that for me, that’s a little advantage heading into the end of the season that we can maybe score some good points at our home event.

Interview edited for clarity and length.