Following an impressive all-the-way victory in Race 2 of the NSW 18ft Skiff championship on Sydney Harbour, tech2 is this season’s champion.

In the final race of the championship, the scene was set for a great finish as less than one point separated the defending champion Winning Group, skippered by John Winning Jr, and the tech2 team.

With the wind strength hovering around the cut-off point between the bigger #1 rig and the #2 rig, the decision by the teams was critical.

Macartney went for the bigger rig while Winning elected to go with his #2 sails.  When the freshening breeze didn’t eventuate, it played into tech2’s hands and Macartney’s team did the rest with a faultless exhibition to lead all the way.

After leading by two minutes at one stage of the race, tech2 finally crossed the finish line with a 1 minute 39 second lead over Smeg (Michael Coxon, Ricky Bridge, Trent Barnabas). 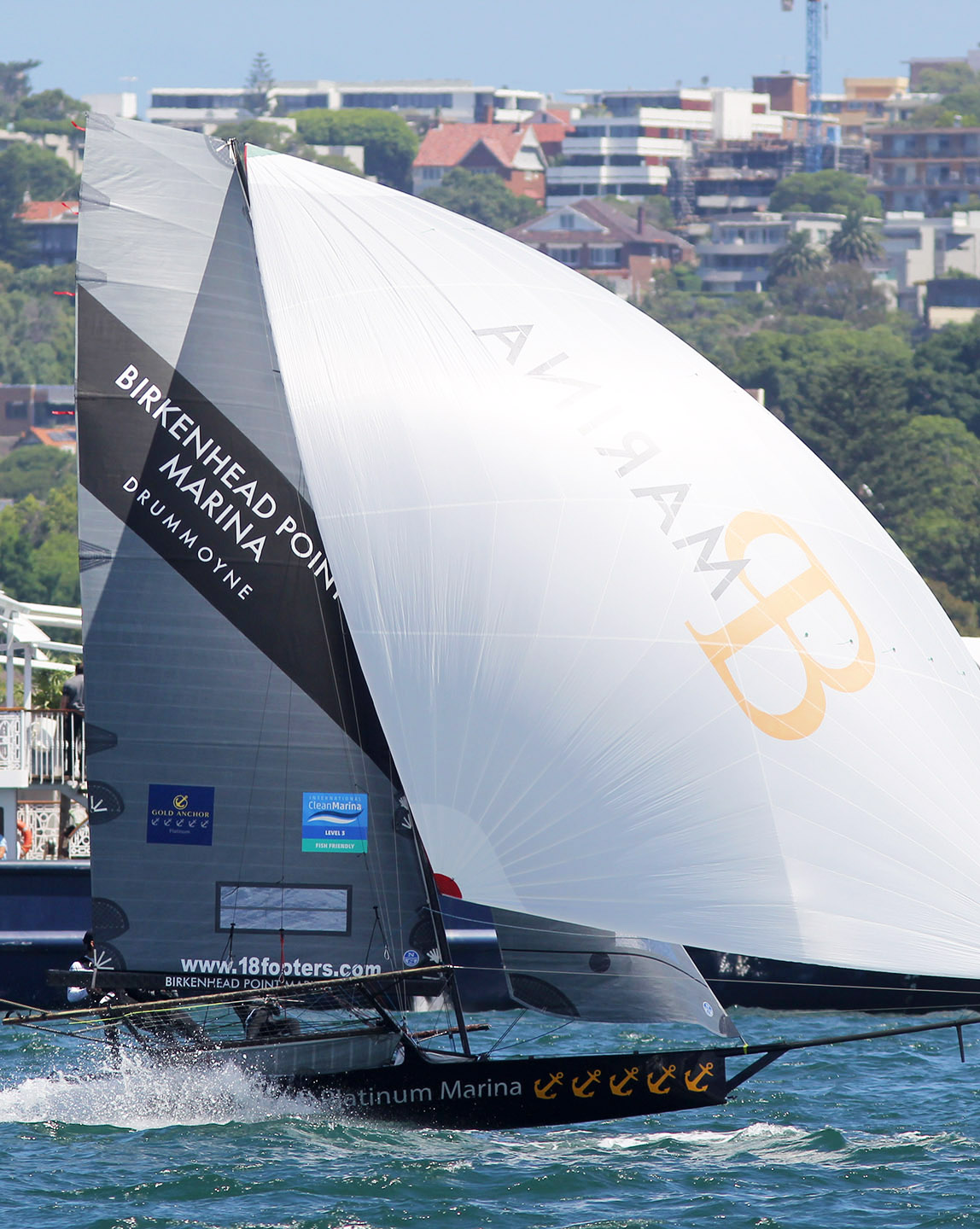 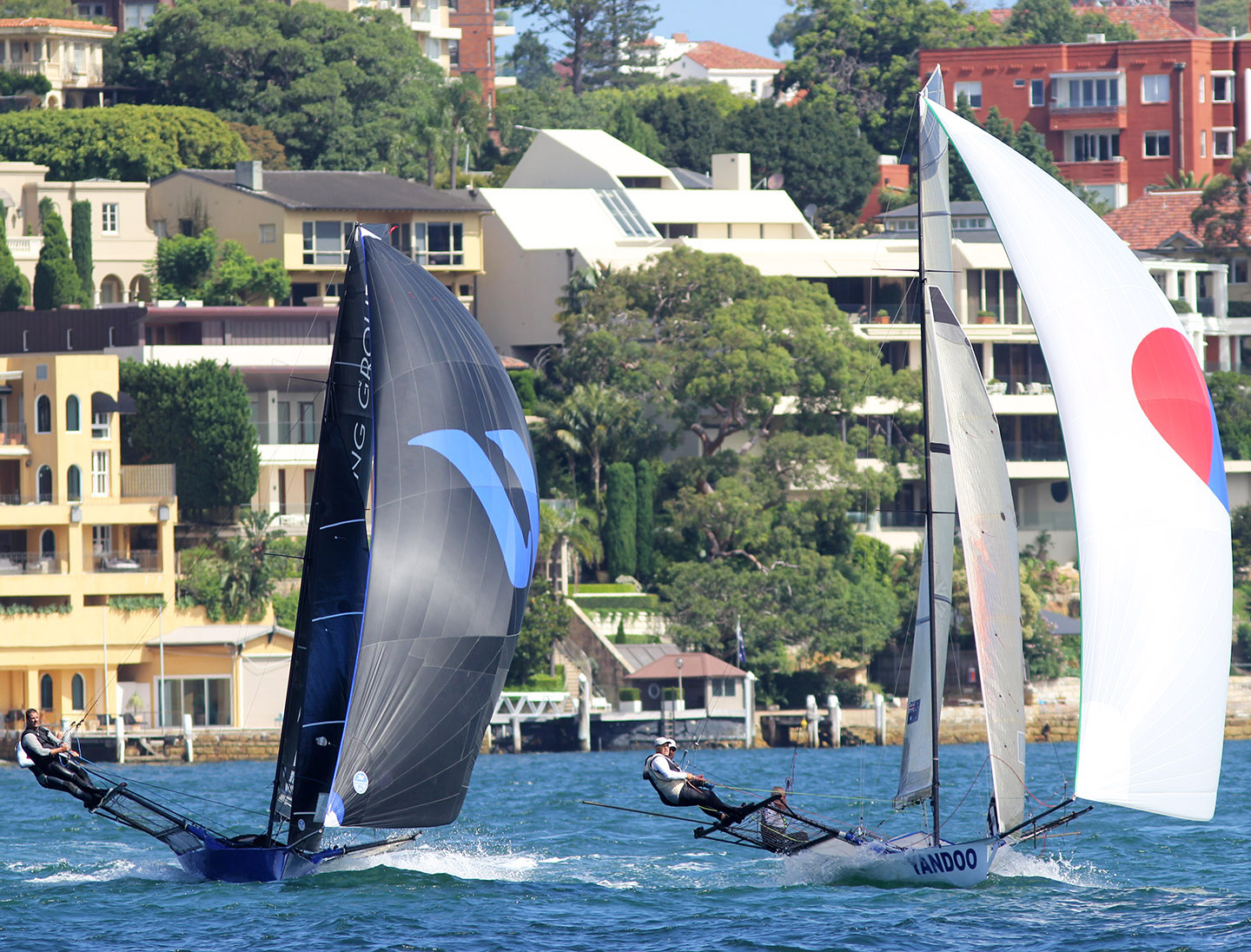 Father and son do battle as John Winning's Yandoo and John Winning Jr's Winning Group race down the final spinnaker leg of the course. 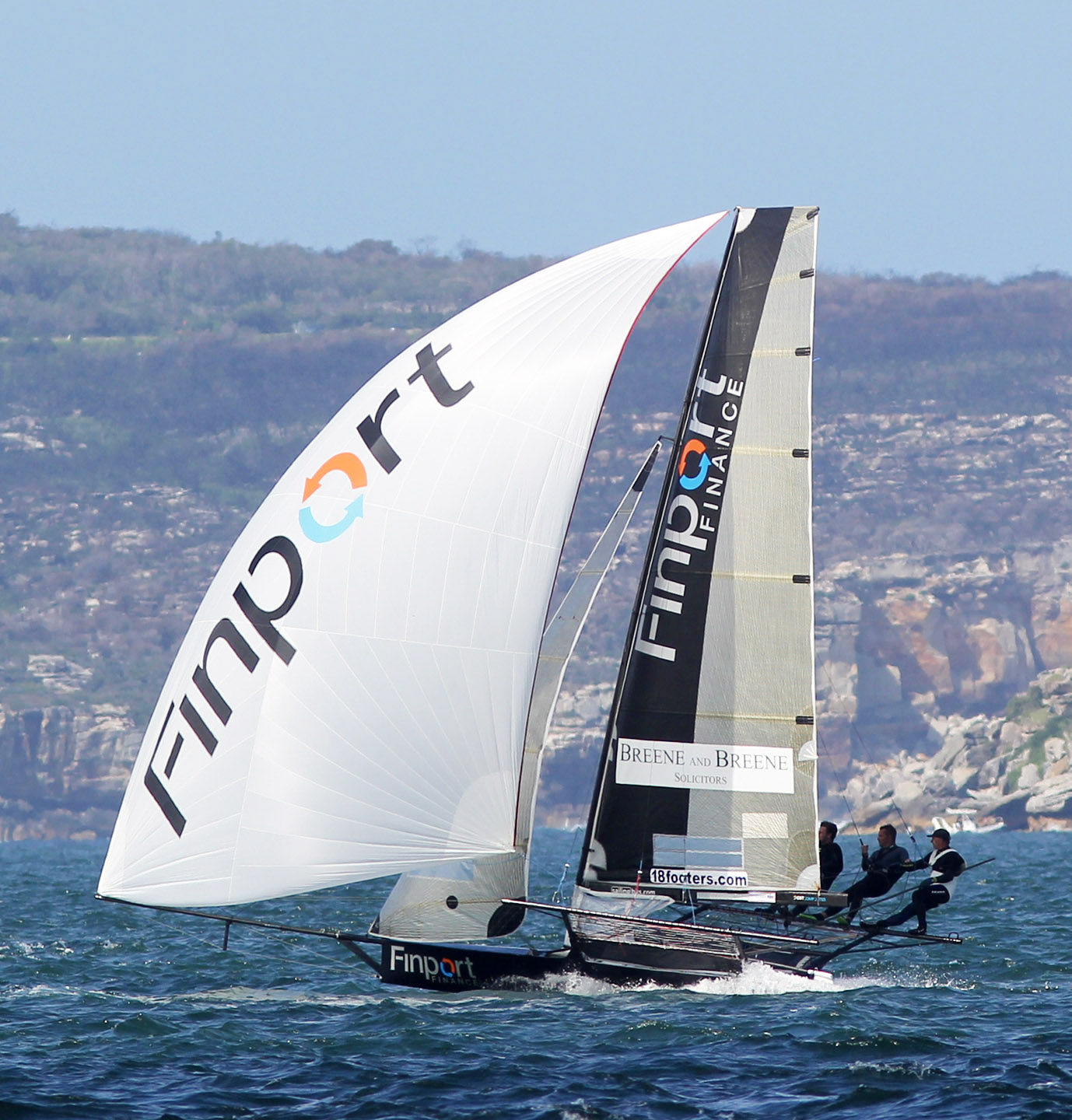 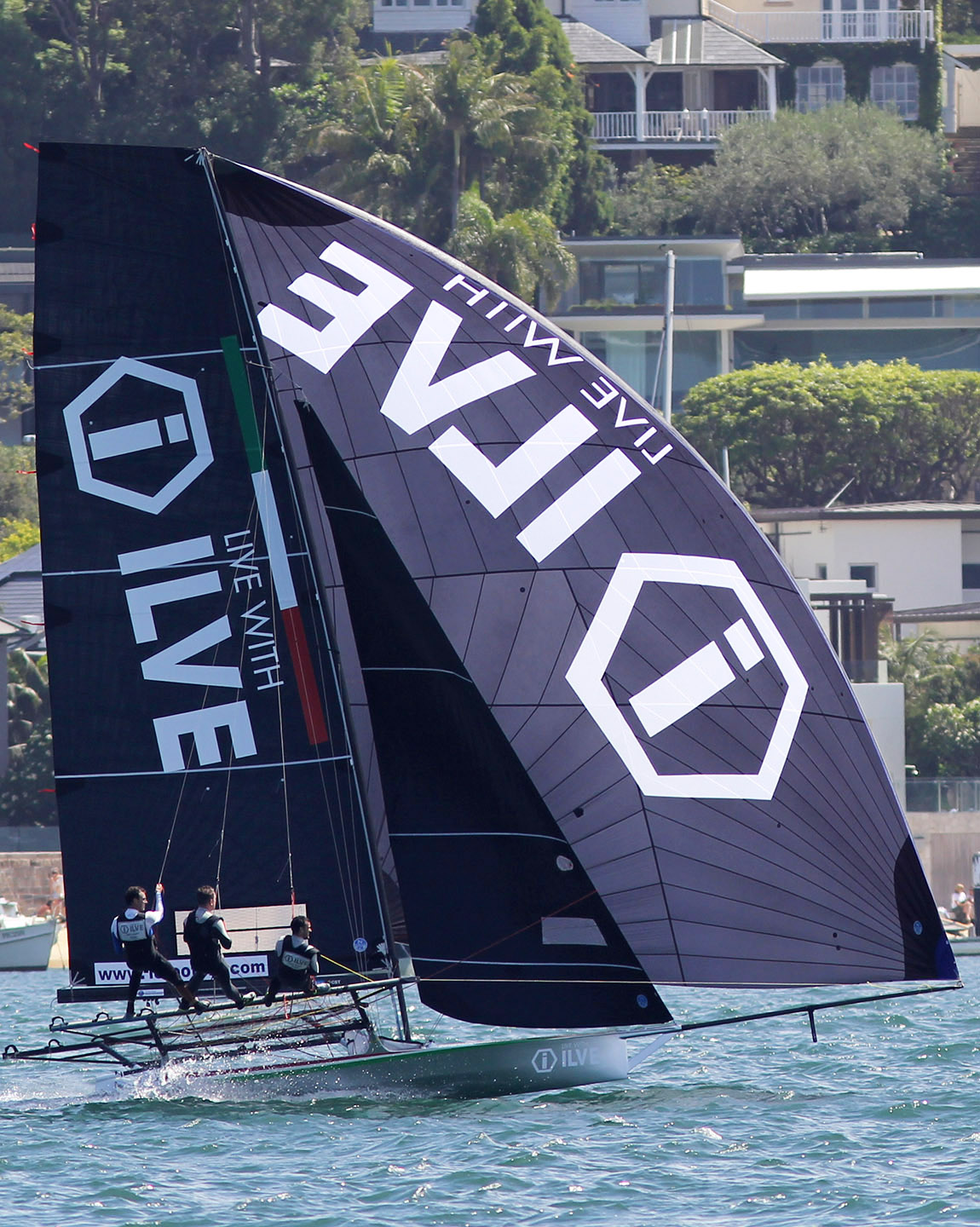 Ilve returned to racing after broken gear forced the team out of last week's race. 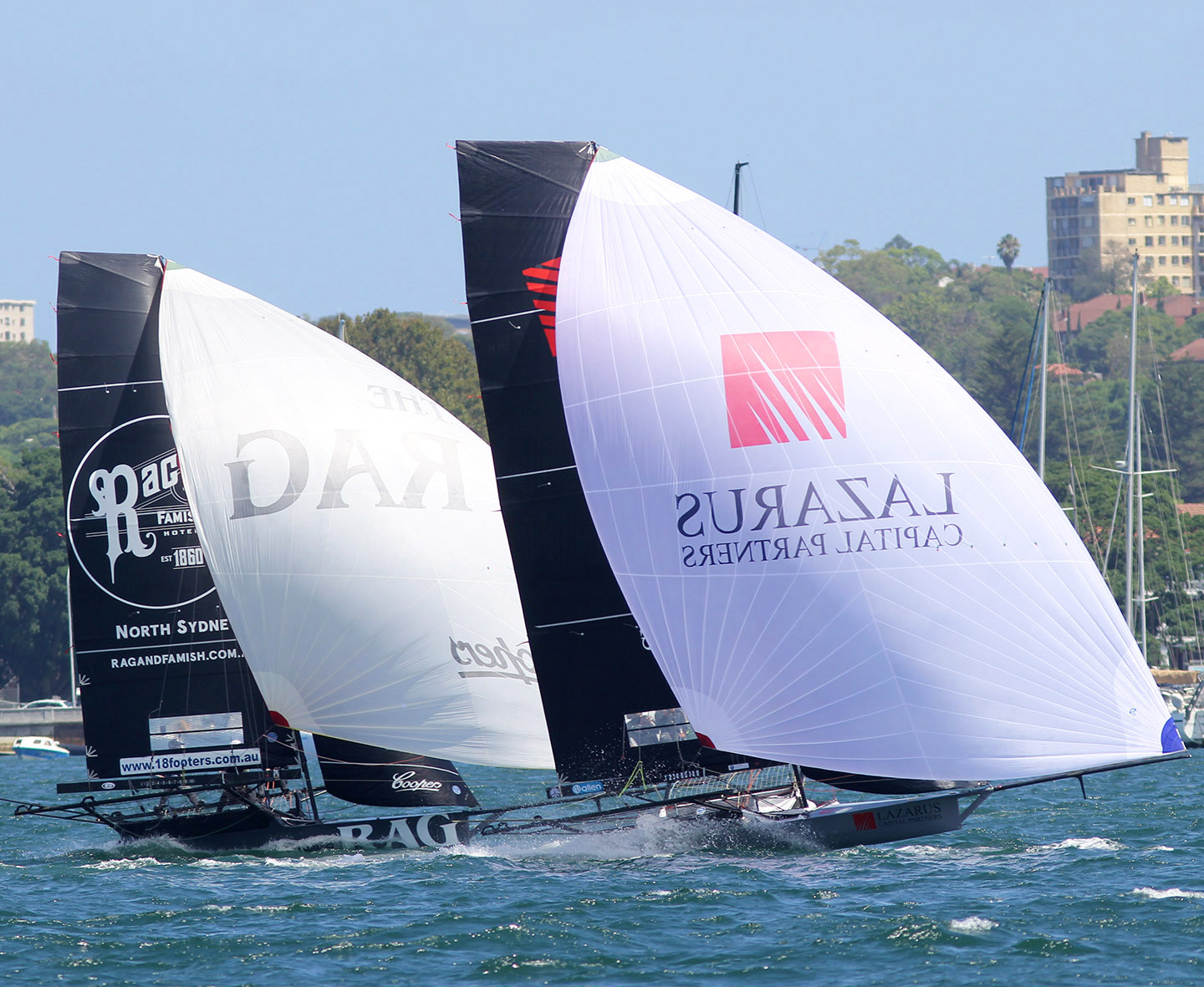 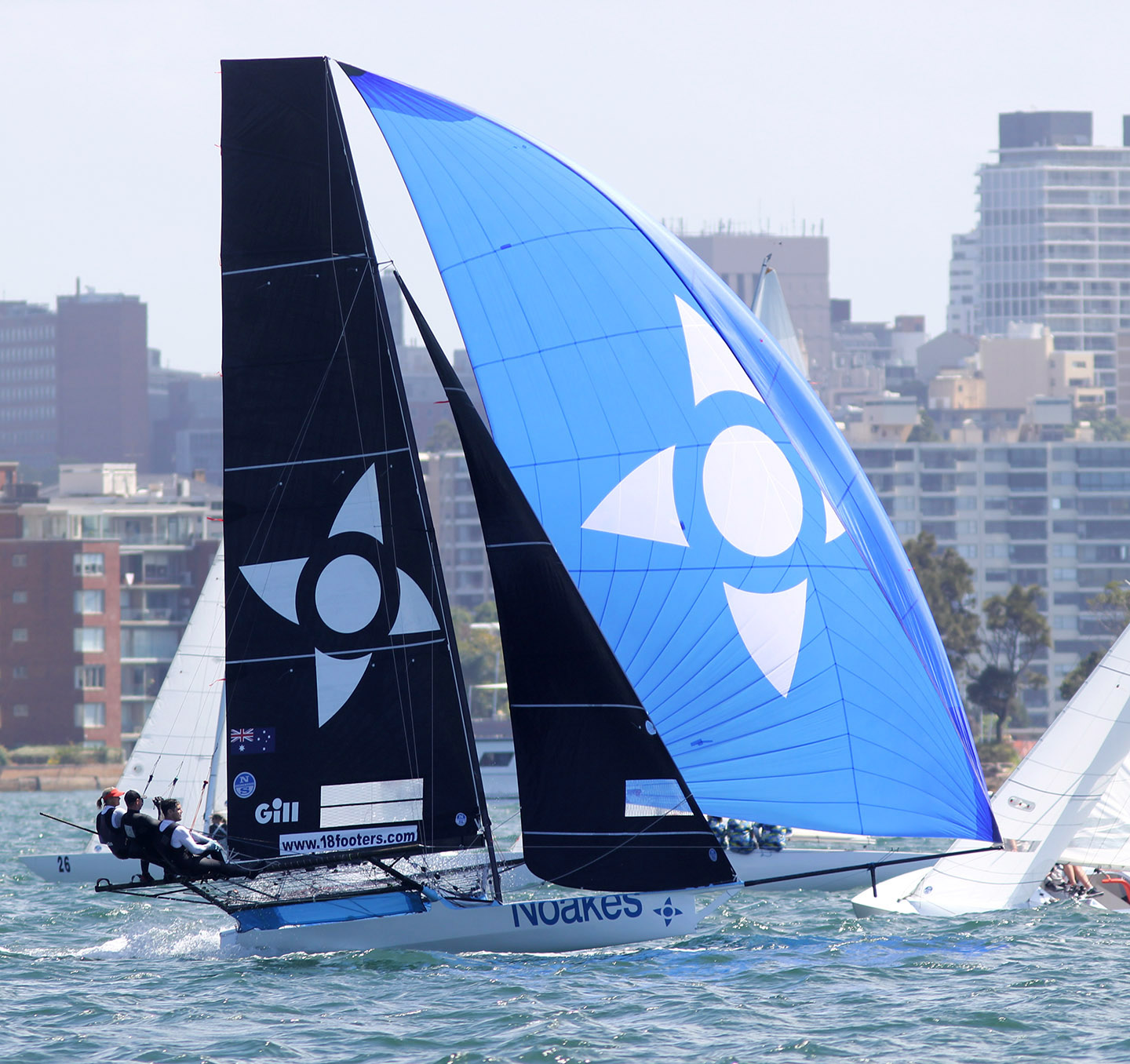 Noakes Blue in traffic on a busy Sydney Harbour today. 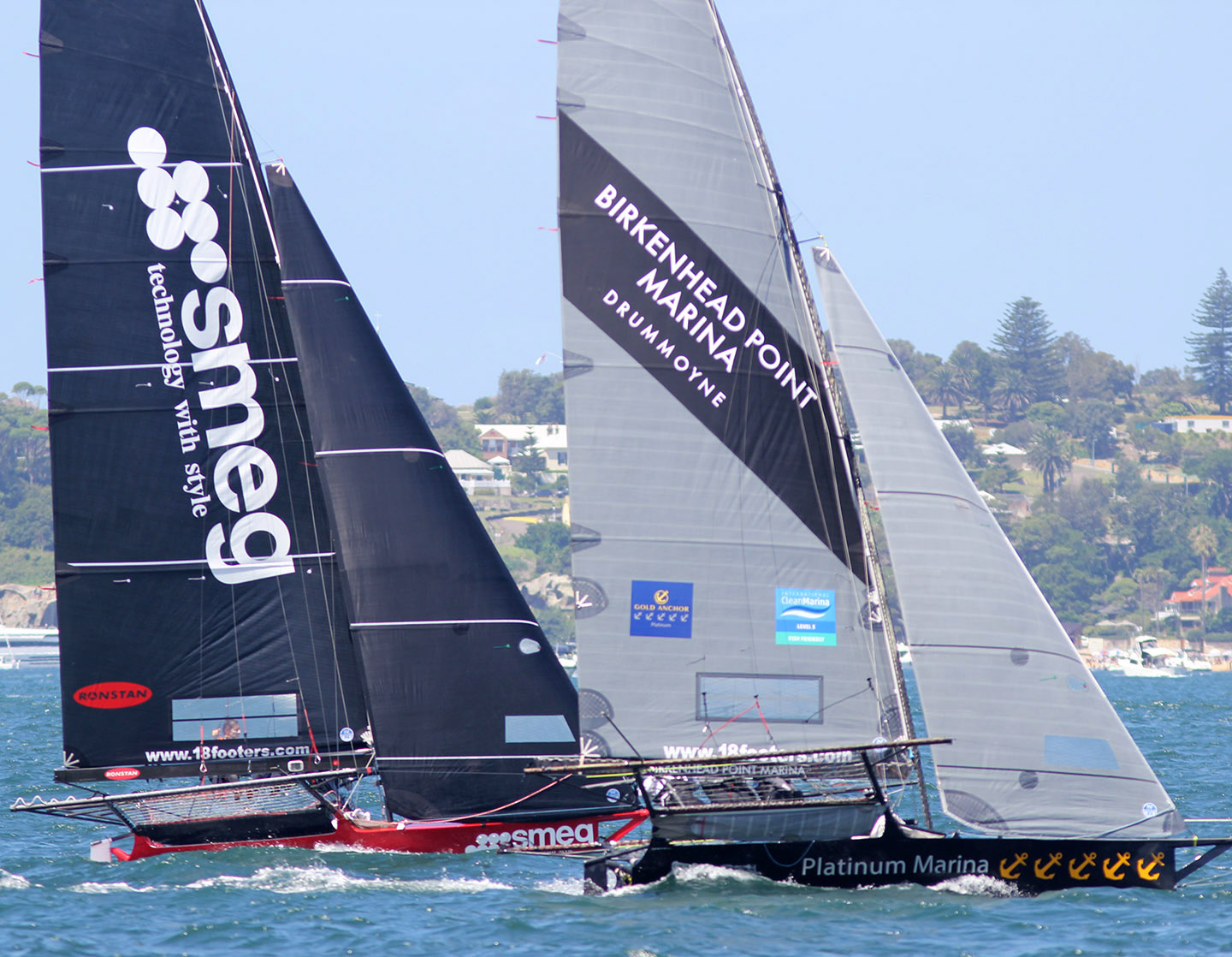 Smeg and Birkenhead Point Marina shortly after the start. 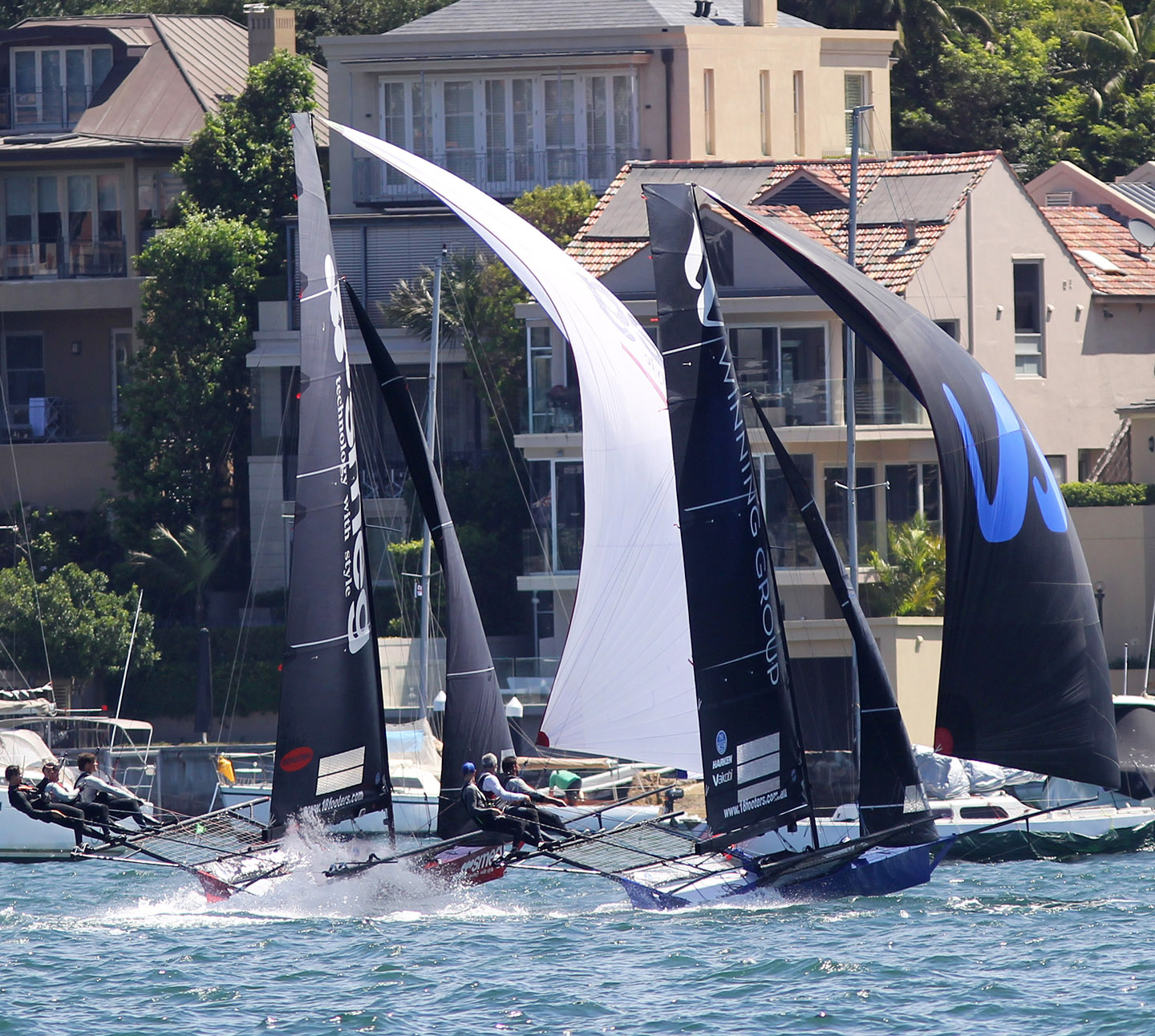 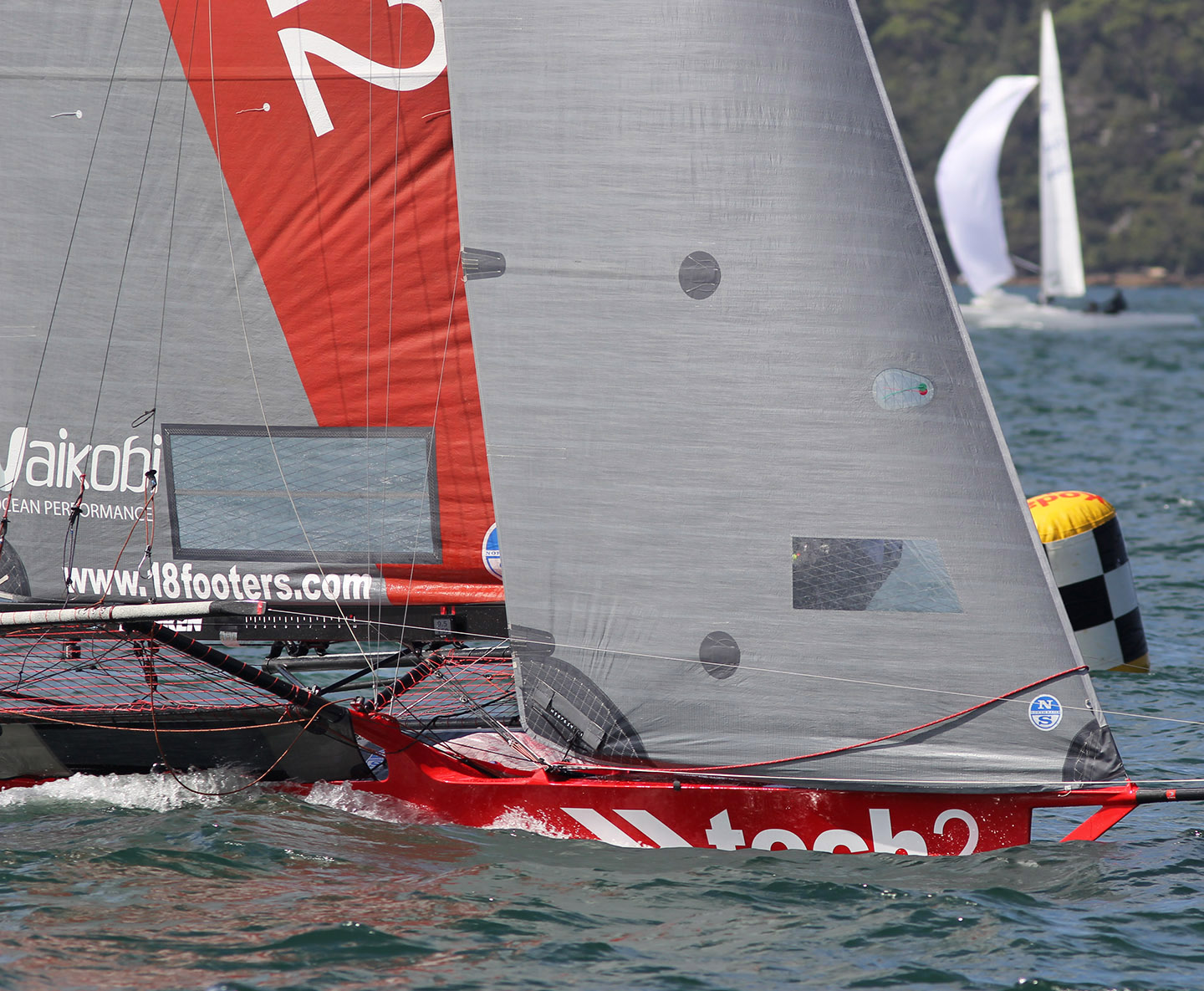 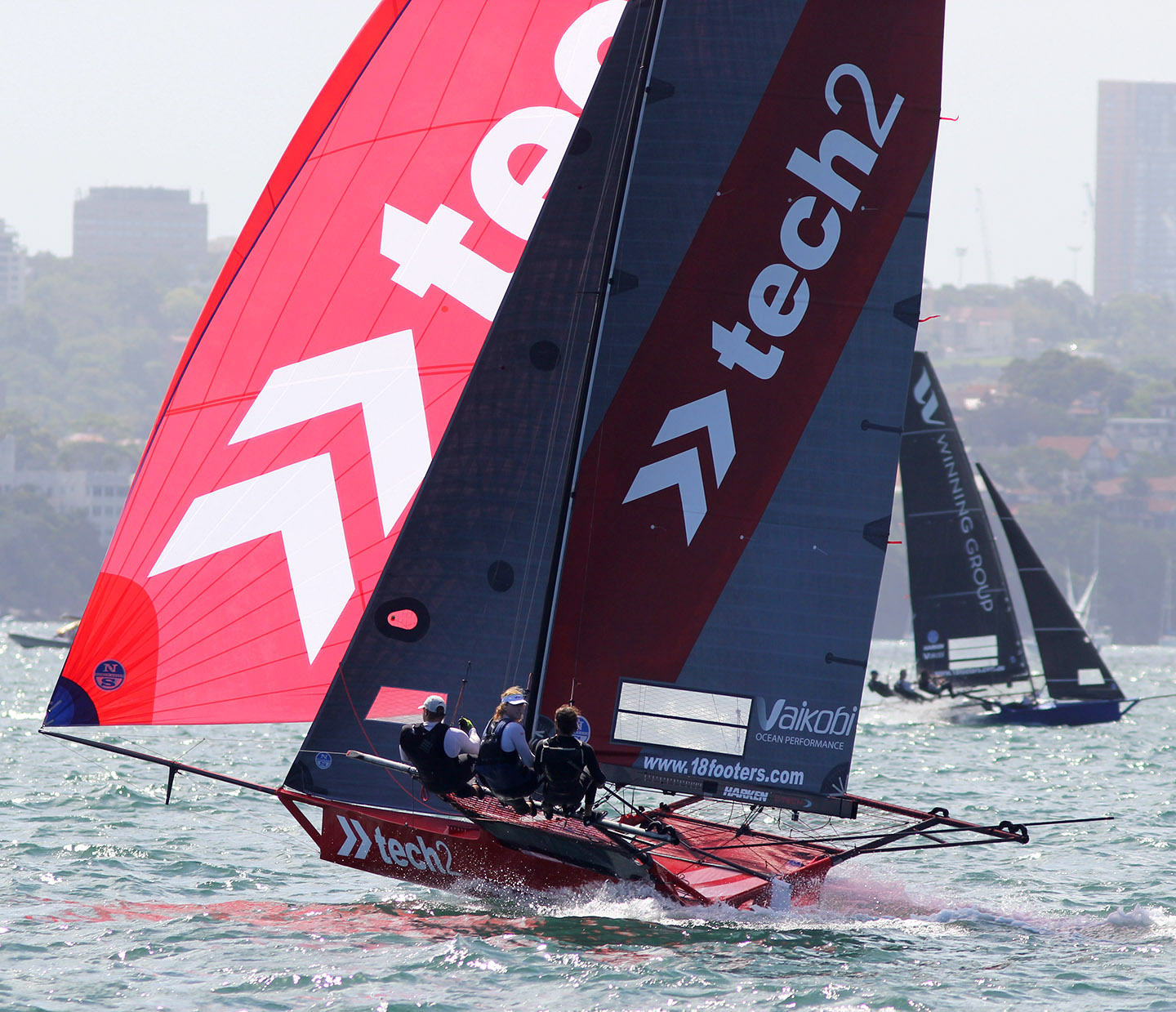 tech2 heads for home as Winning Group for the windward mark. 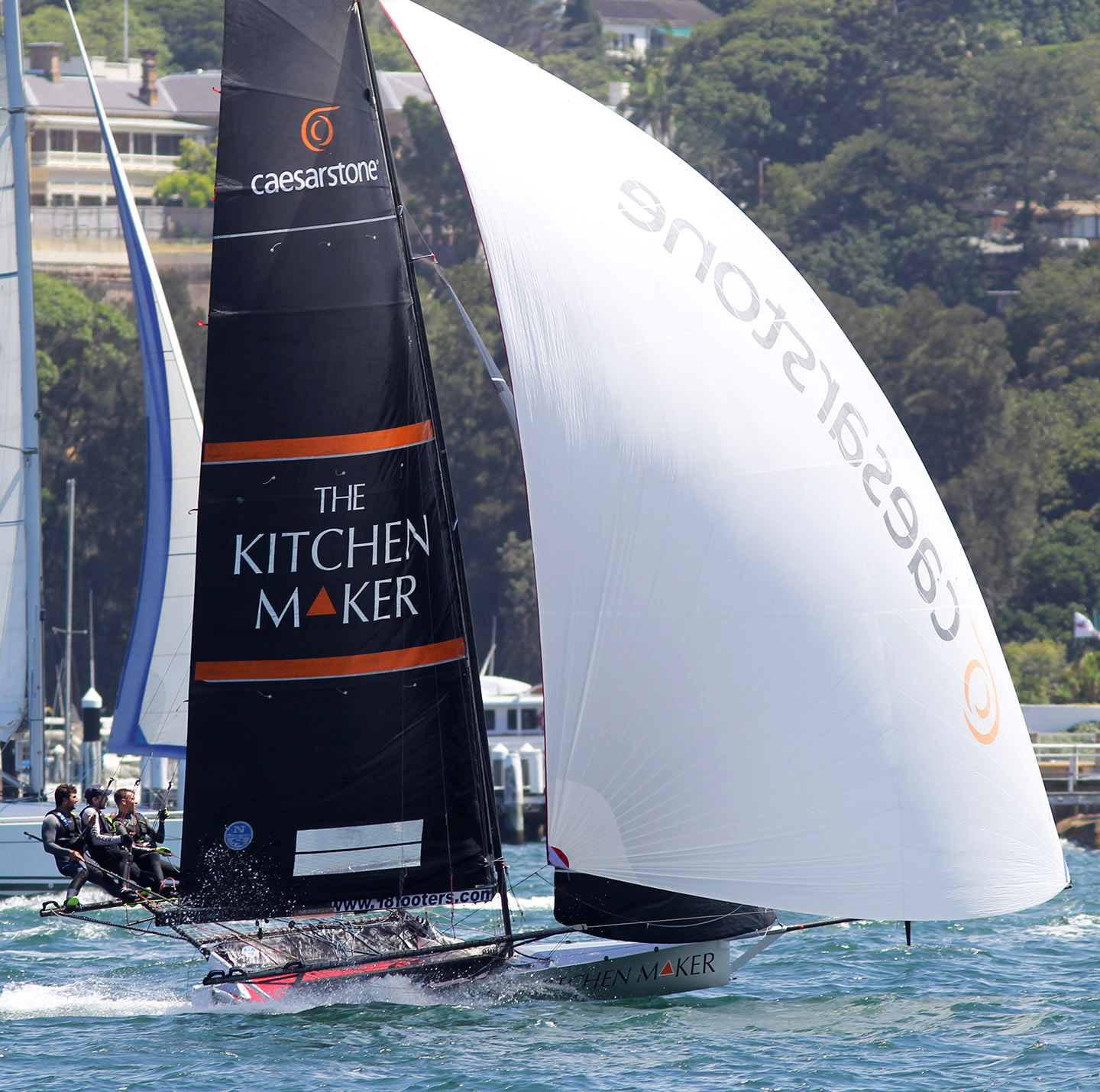 The Kitchen Maker-Caesarstone was in seventh place early in the race.
Noakesailing (Sean Langman, Ed Powys, Josh Porebski) finished a further 1 minute 24 seconds back in third place, followed by Winning Group, Yandoo (John Winning), Finport Finance (Rob Greenhalgh) and Andoo (Marcus Ashley-Jones).
Although tech2‘s winning points margin in the championship was just three points from Winning Group, but the closeness of the competition between many of the fleet was highlighted by the scores of the next four teams.
Final points were: tech2 on five points, Winning Group on eight, then four teams finished equal on 18 points and had to be separated on count-backs.  The Oak Double Bay-4 Pines (Aron Everett) finished third, Finport Finance (Keagan York) was fourth, Yandoo fifth, and Andoo sixth.

From the start it was obvious, and natural, that tech2 and Winning Group were going to stage a match race situation as both teams were alongside each other at the pin end of the start line.

The race to the windward mark in Rose Bay was close before tech2 grabbed a narrow (10-second) break over Andoo with Winning Group a further 20 seconds back in third place.  Smeg‘s crew elected to sail to the western side of Shark Island and was in fourth  place ahead of Noakesailing, Finport Finance, The Kitchen Maker-Caesarstone (Jordan Girdis) and Yandoo.
While tech2 increased the margin to 20 seconds at the bottom mark at Robertson Point, Smeg had now moved into second place ahead of Andoo and Noakesailing.
The positions and margin between the two leaders remained constant over the next two legs of the course but the pair had edged further away from the challengers. Andoo was 45 seconds behind the leaders at Clark Island with Winning Group suffering from the smaller sails, more than one minute from the lead.
Then, tech2 extended her lead to one minute at the Rose Bay mark. Later in the race it was out to two minutes before the team cruised home a comfortable winner.
The performance of Smeg showed that the team will be a strong force in the Australian Championship.
The need to re-sail Race 2 of the NSW Championship due to the 40-knot winds that battered Sydney Harbour late last year created a situation that meant today’s race was also Race 1 of the 2020–21 Australian Championship.
It was a double bonus for tech2, who is the defending Australian champion.
18footers.com.au
Previous article