The September sun almost broke through the overcast sky when ‘Alaka’i’ arrived at the dock in Lorient. Onboard the IMOCA 60 yacht, an exhausted yet euphoric crew – Simon Fisher and Justine Mettraux.

For two days, the co-skippers dealt with the entire bandwidth of weather conditions Brittany has to offer this time of the year: From heavy rain to blasting sun, from smooth waters to a hectic sea state. 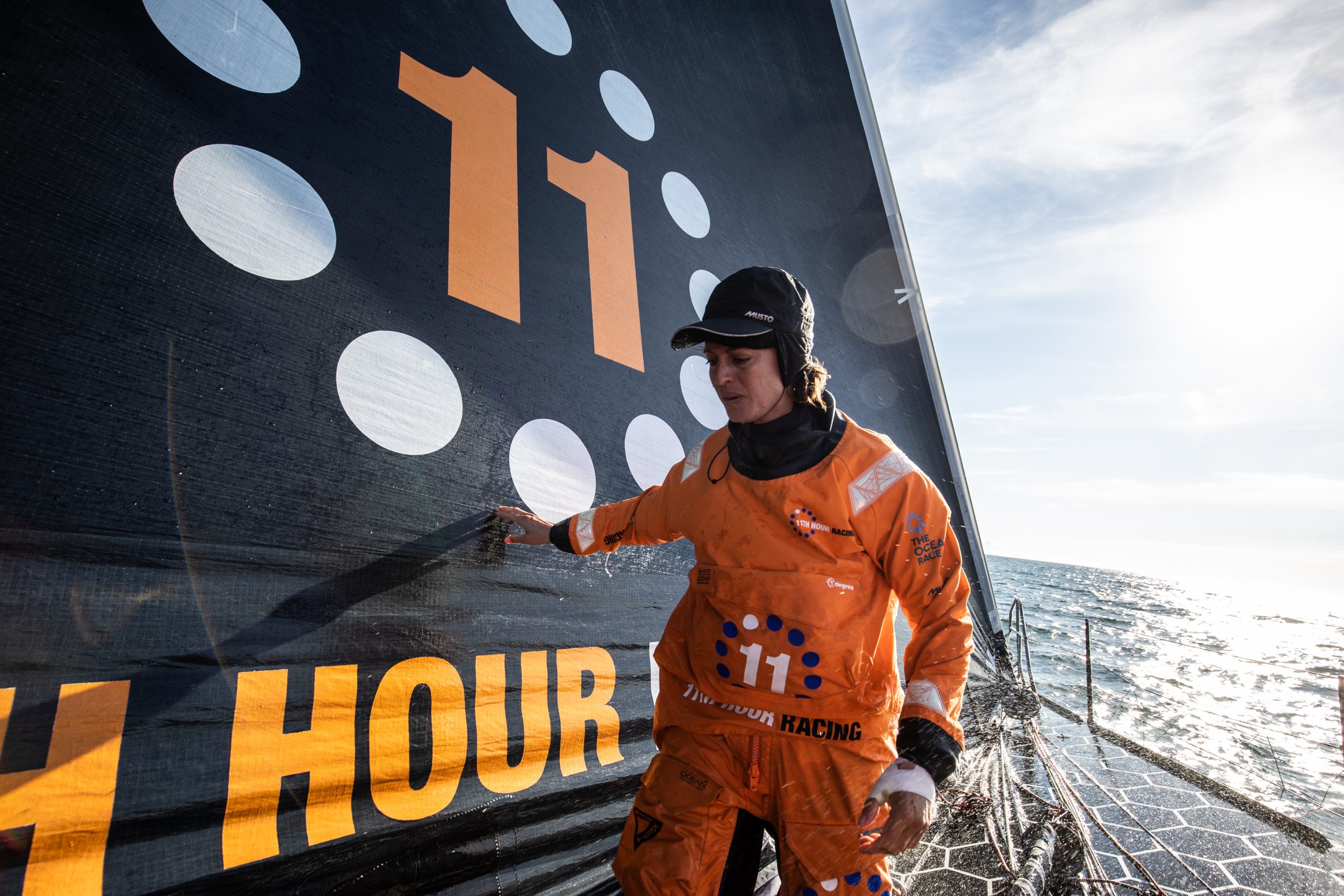 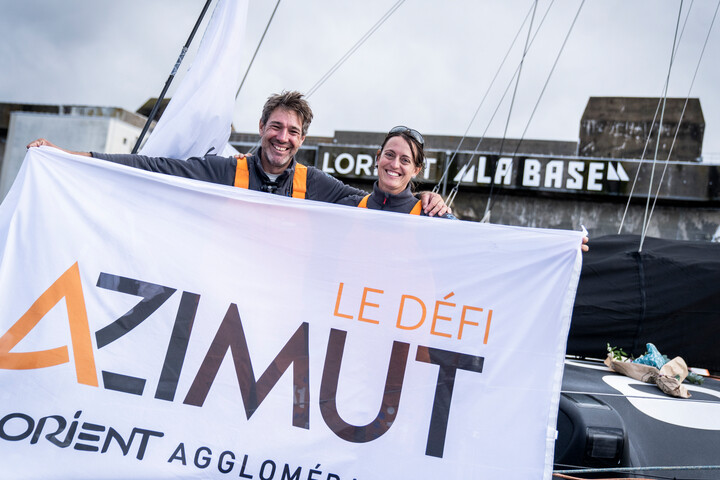 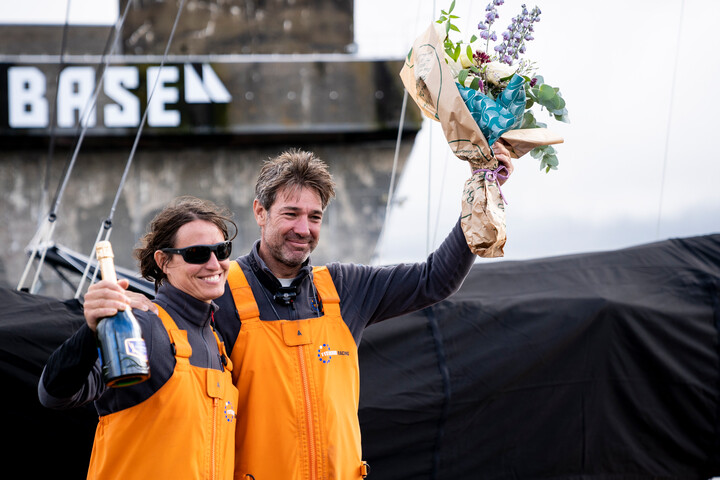 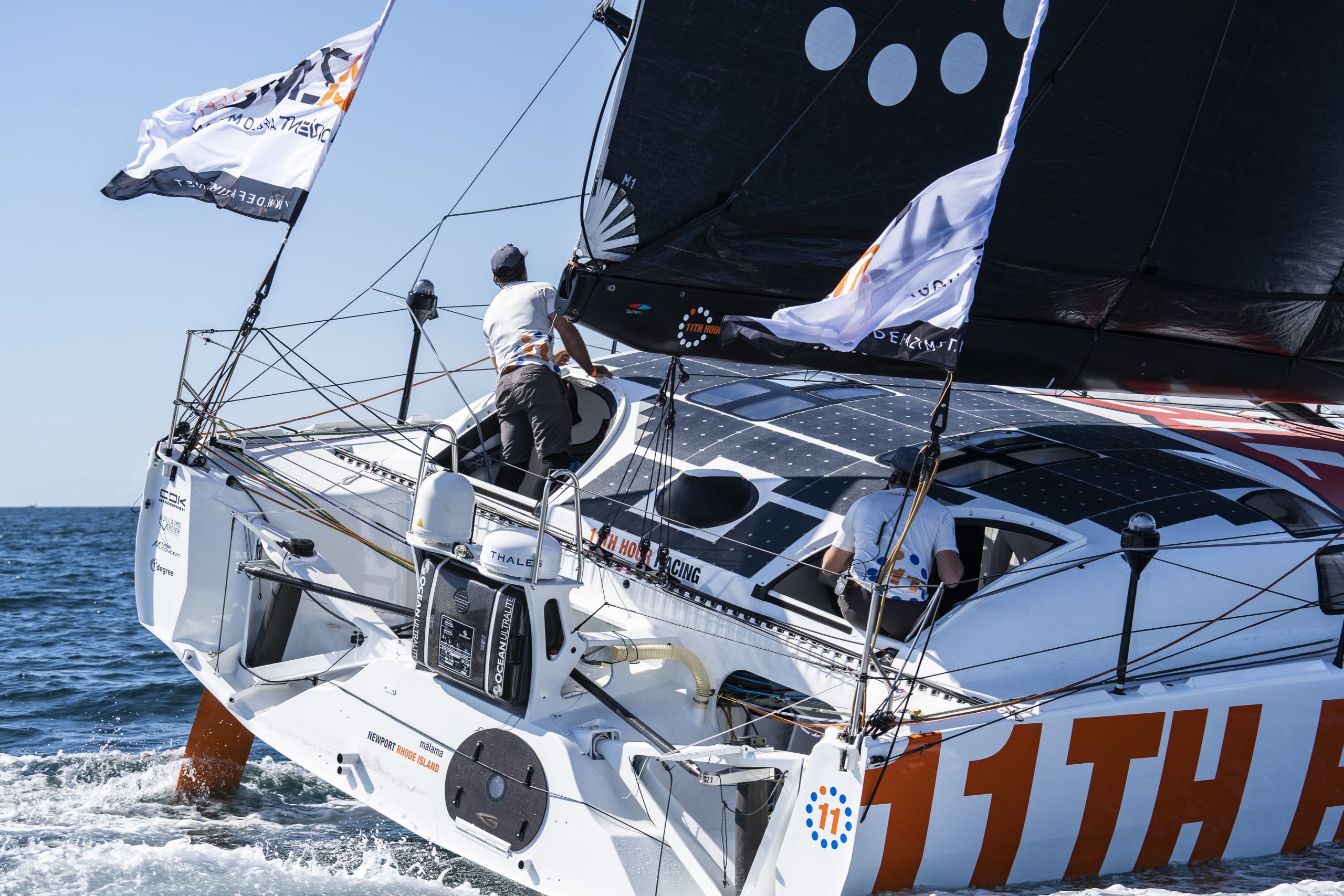 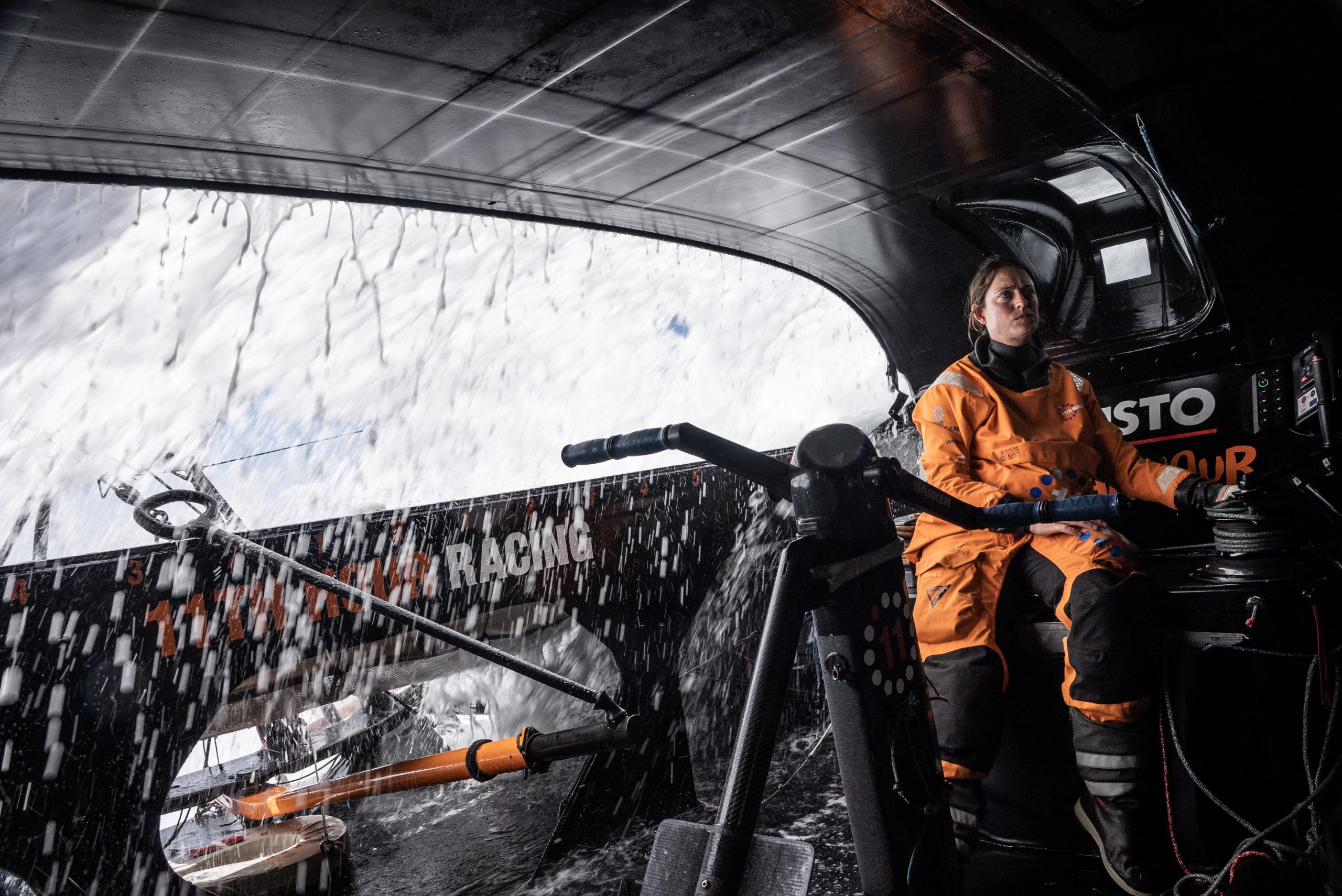 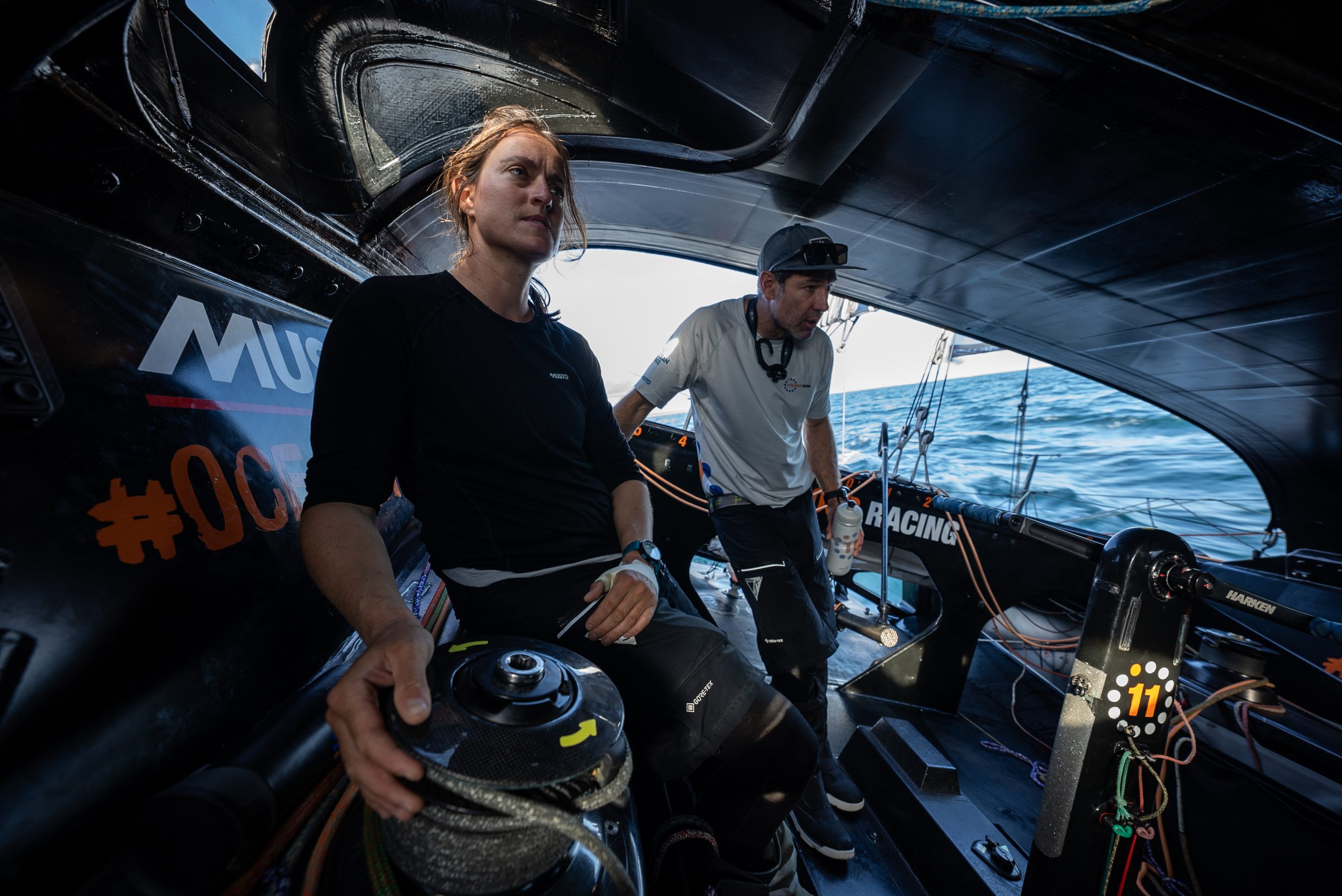 Simon ‘Sifi’ Fisher summarised: “I am super satisfied with the result. It was a really tough race. I’m proud of the fact that we managed to keep things together and fight until very the end”.

“We’re still learning as a team and this experience was important for us, requiring quick turnarounds and smart decision-making when it came to manoeuvres.

“Obviously, there is always room for improvement, but I think we did a good job building and maintaining speed and adapting to this large variety of conditions. We are glad to be back on dry land, these past hours left us pretty knackered.”

After snagging fishing gear drifting offshore, the crew had to momentarily pause the race in the first night to assess potential damage and clear the foils and rudders. At this moment, Alaka’i sat in fifth position amongst the fleet led by Apivia (Charlie Dalin/Paul Meilhat), the overall dominating French team and event winner.

Justine described one of the key moments when catching up to the rest of the fleet leaders: “Between mark one and two, we had some difficult decisions to make”.

“Usually, the course requires a sequence of maneuvers, but we agreed to stick with a pretty straight course instead. This way we kept up solid speed and managed to pass fellow competitor Arkéa Paprec (Sébastien Simon/Yann Eliès) to move into fourth position after being in fifth place early on. We had some great reaching conditions and managed to become very fast.”

Continuing the course back to Lorient, Sifi and Justine managed to overtake team LinkedOut and Bureau Vallée in the early morning hours of today after taking a more southerly position after rounding the final mark of the course. Building out their lead, ‘Alaka’i’ ended up crossing the finish line at 8:56am, two hours behind event winner Apivia (arrival: 6:56am) and nearly 20 minutes ahead of third place finisher LinkedOut (Thomas Ruyant / Morgan Lagravière) who arrived at 9:13am local time, closely followed by Bureau Vallée (arrival 9:16am).

“It feels great to be part of 11th Hour Racing Team and get the chance to sail this boat with Sifi,” said Justine.

“Our team dynamics are amazing, and we are fortunate to have a fantastic crew behind us. It’s great to train with guys like Charlie Enright and Pascal Bidégorry, working towards our common vision of The Ocean Race 2022-23.

“And also amazing to work with such a strong shore team that supports and pushes us. We are starting to feel really comfortable looking at our big challenge of this season as a double-handed team – The TJV.”

11th Hour Racing Team had initially started the 48-hour challenge with two boats. In addition to ‘Alaka’i’,’ the Team’s new IMOCA yacht ‘Mālama’ also started the race but returned to Lorient following damage to the tiller arm on the first night of racing.

With the upcoming inhospitable weather, it would been a considerable risk to continue to course, which led co-skippers Charlie Enright and Pascal Bidégorry to make the tough decision to retire from the race. Mālama put on a strong opener to the overall event, finishing first on the Speed Runs on September 15.

On September 18, Le Défi Azimut wraps up with one final event – Tour of l’Ile de Groix, off the picturesque Island just outside of Lorient. While repair work to ‘Mālama’ is underway, both boats are currently scheduled to take part in the crewed race.

Sifi and Justine undertook their double-handed debut at the Rolex Fastnet Race last month and are already one of the favourites for the upcoming Transat Jacques Vabre (TJV)!

The TJV will start on November 7 in Le Havre, France, and lead all the way to the French Caribbean Island of Martinique.

The full list of results and live updates can be found online.