Yacht design for me has always been about trade off and how to address your weaknesses and build on your strengths. That’s what I find intriguing.

If you look at the history of the Rolex Sydney Hobart it is more often than not an upwind/downwind race.

In the case of the supermaxis, Boxing Day in Australia is the only time and place they all line-up, so it’s quite interesting, like a Melbourne Cup in a sense, because they are all quite different boats.

The supers have to move with advancements in technologies, they have to adopt it as soon as it comes out; you can’t fall behind in technology or you are going to get left behind out on the water. It’s absolutely about speed and what conditions you are trying to win in. 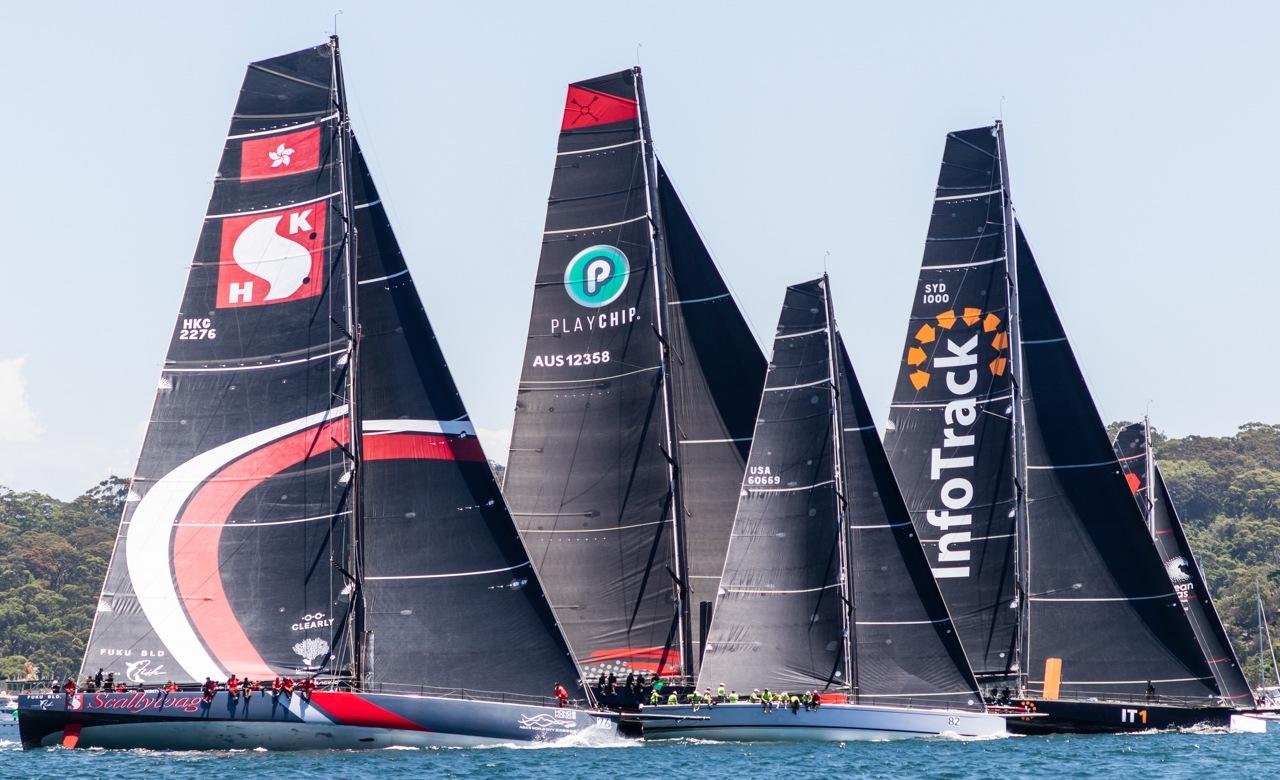 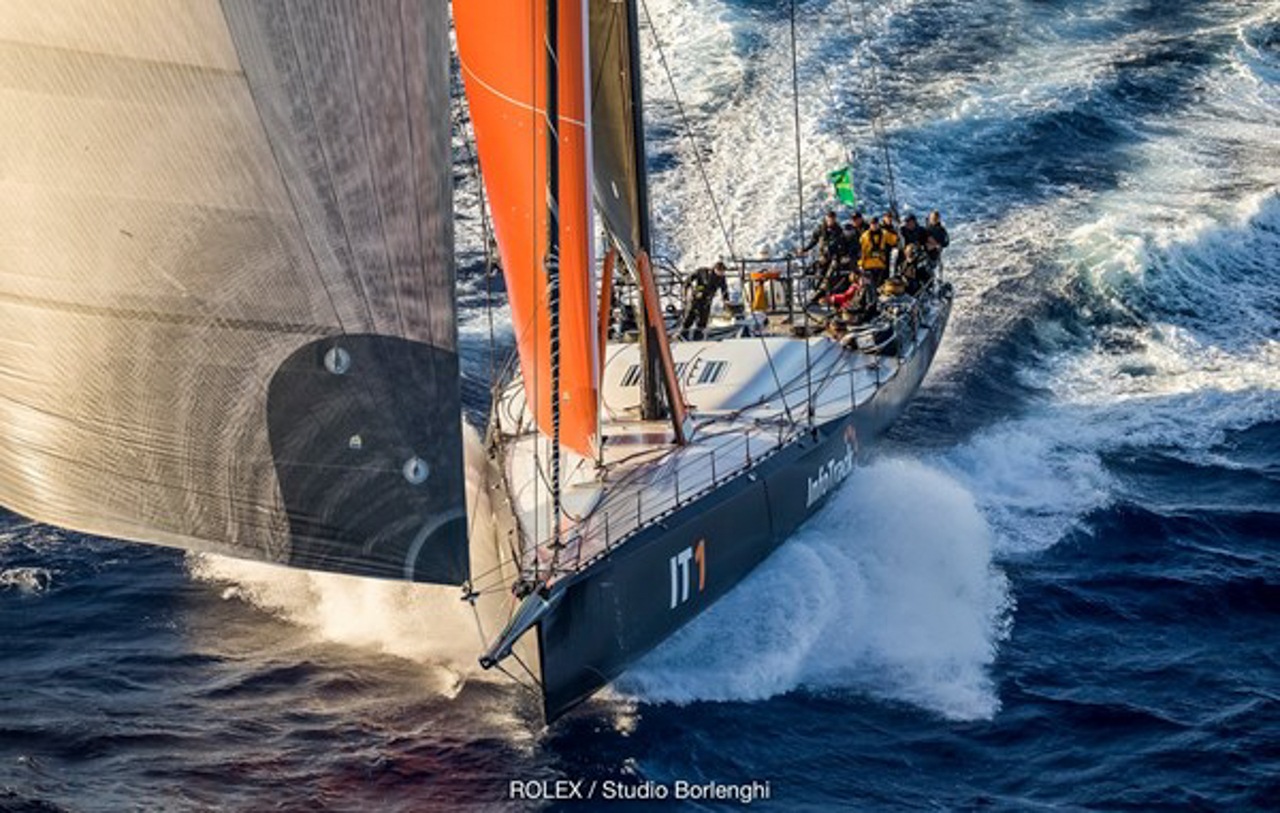 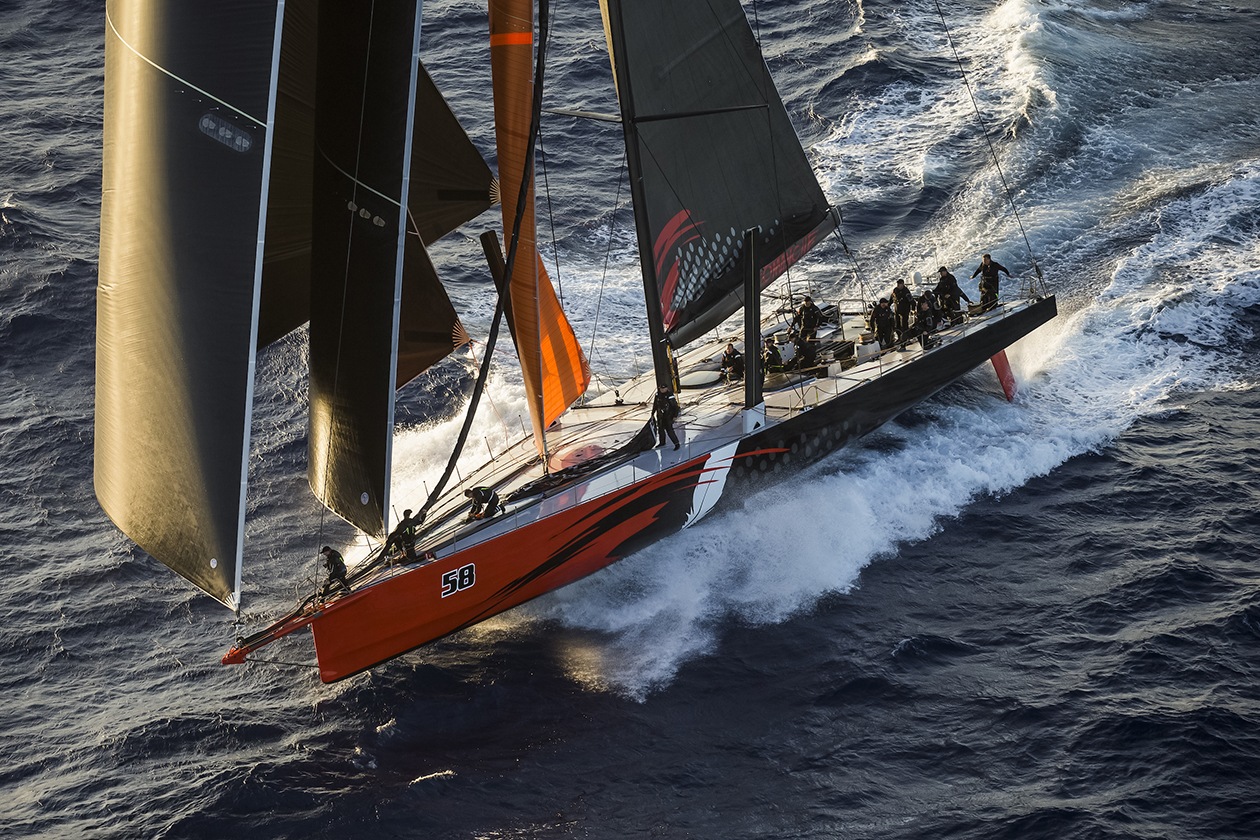 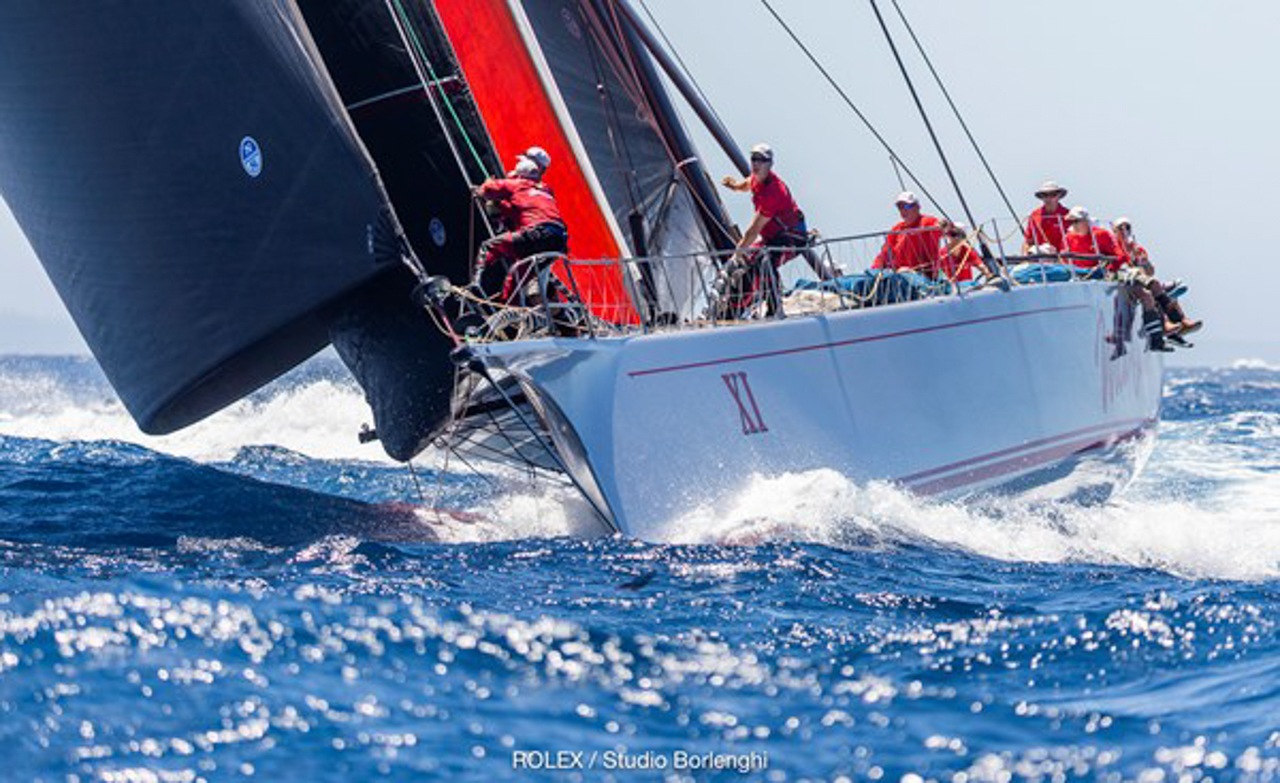 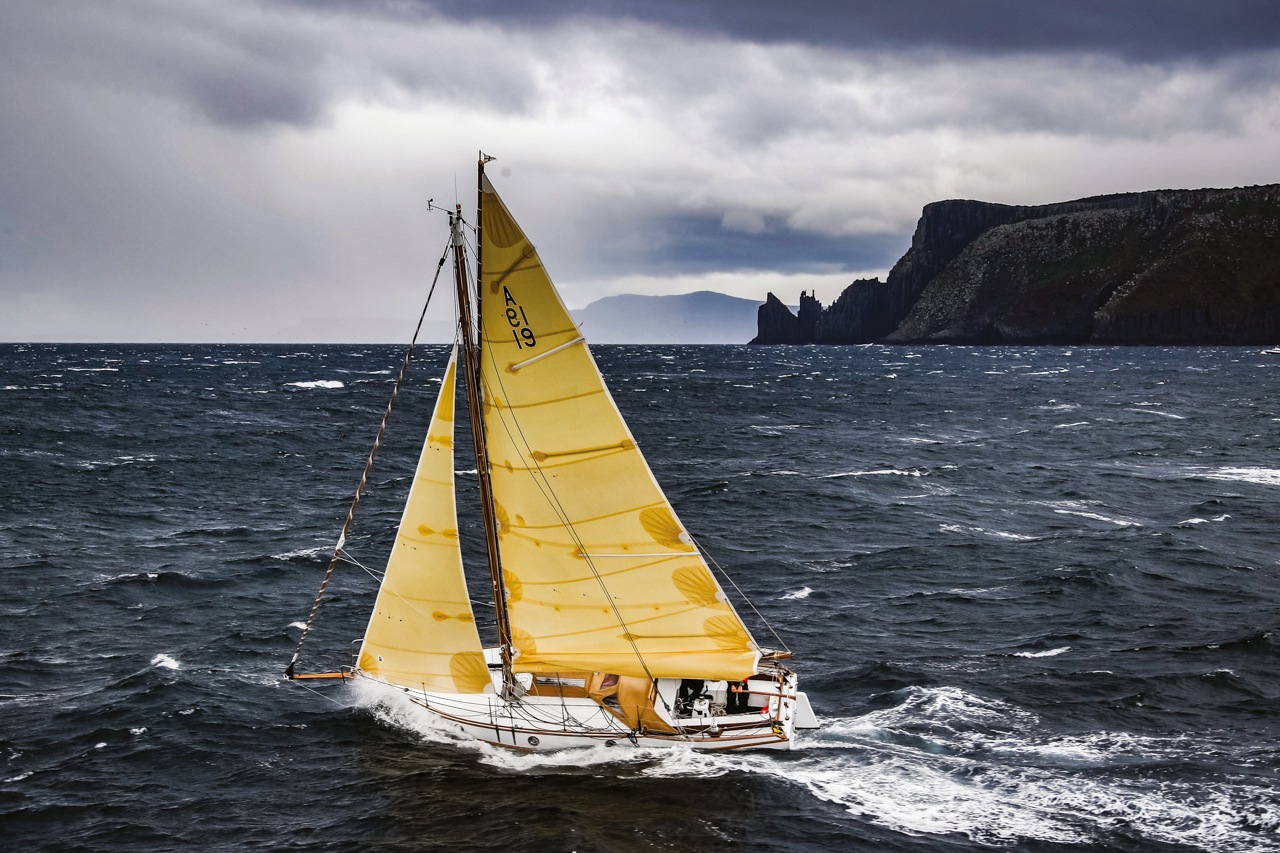 Black Jack is attempting to trade a bit of light air performance off for better results in fresher conditions.

Both Comanche and InfoTrack rely on their higher righting moments; spring sheets and they just take off like a shot. Upwind/downwind not so much, you’ve just got to get them there.

With Scallywag we’re right in the middle (of righting moment).  Since last year we’ve redesigned the bowsprit completely, we stayed with the side wires which were retrofit and when you do that, if you think about, the sprits are actually a mast because you it’s rigged from the side and vertically.  It’s truly a compression post now.

You don’t realise that when you are talking about 10 tonnes you think oh that’s not that big a number first of all, second of all, when you try to take it with a 20 degree bobstay it’s something around 40-50 tonnes, so it’s quite a big load.

Cutting edge of their day
I have a lot of respect for designers such as Alan Payne and Olin Stephens of Sparkman & Stephens.

I think the more dominant feature back then was probably the materials and their limitations, rather than the handicap rule. Early on, they were building out of wood and it’s very interesting.

When Sean Langman decided to re-build Maluka of Kermandie, designed by Cliff Gale in the early 1930s, he didn’t need to, but he wanted to make sure the boat complied with ABS structural requirements. So, Sean had me go through the entire boat, bow to stern, and figure out if the structure was up to it and if we needed to add any frames or whatever.

I went through and analysed it all and I don’t think they (the designers) could have done a better job of picking the timbers for each particular task. That’s for the planking, the keel and so on. So the point is, these guys were all over the materials. That’s what they had, and they figured which timber was best for what and how to make the most out of it. 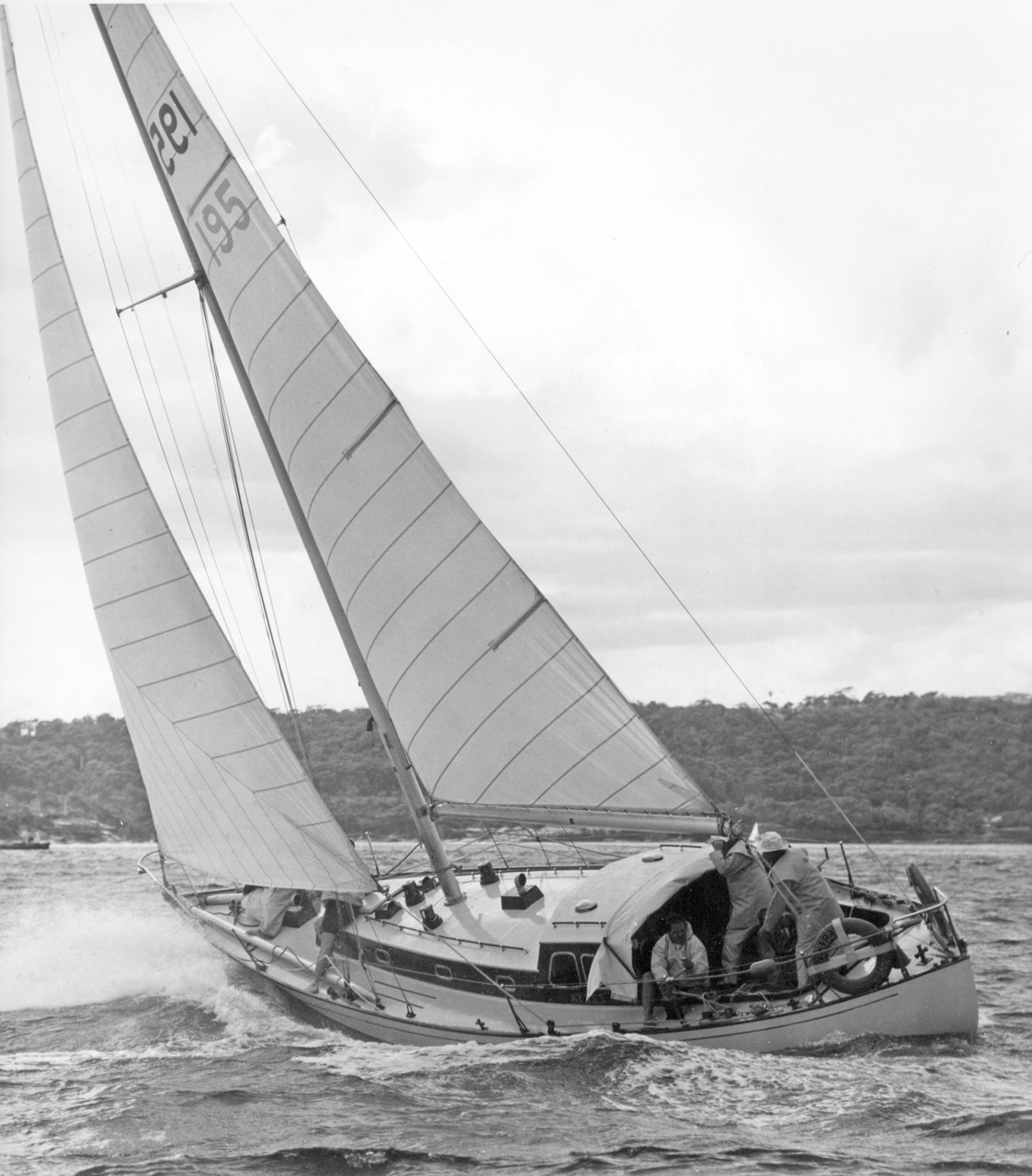 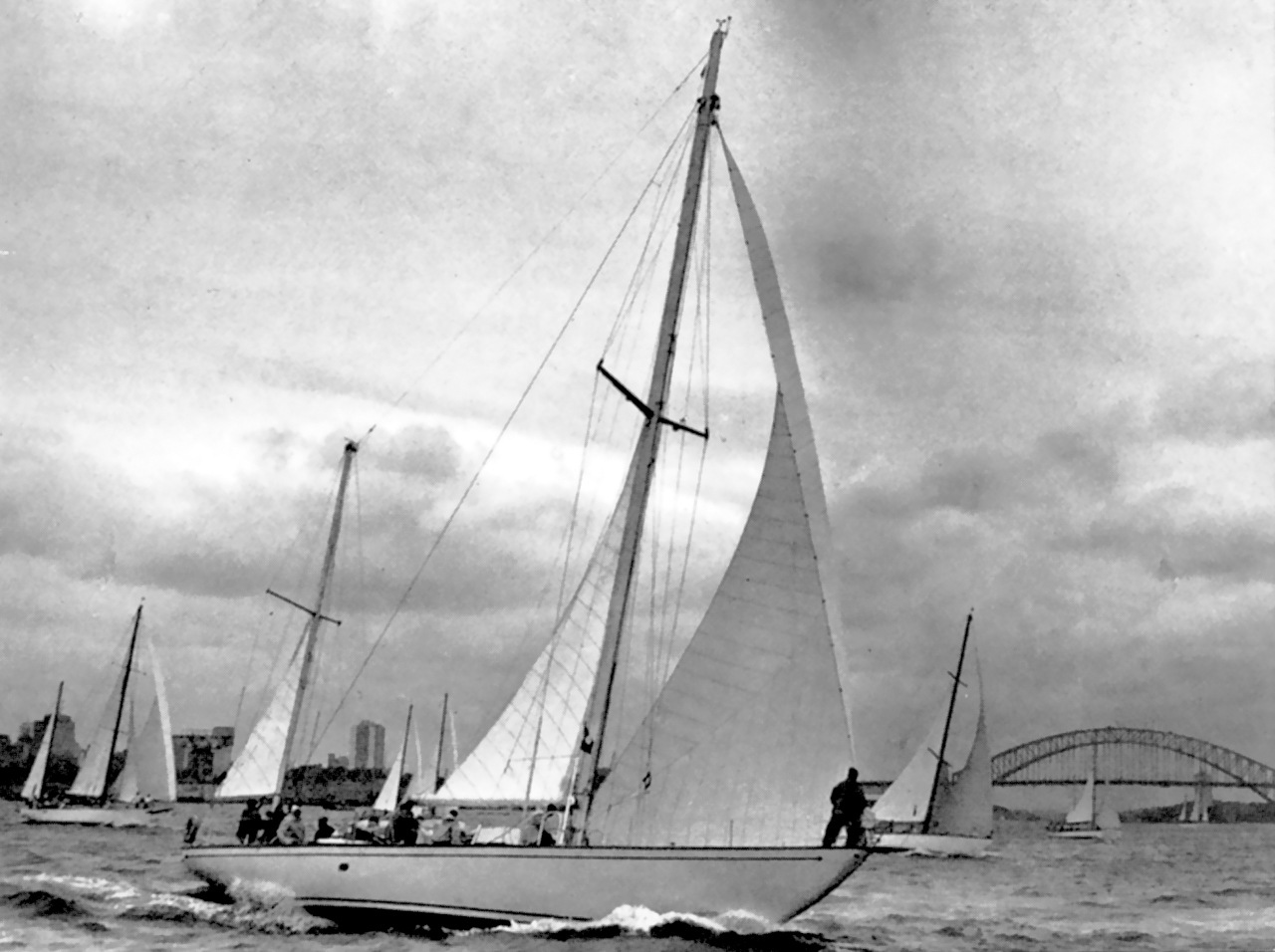 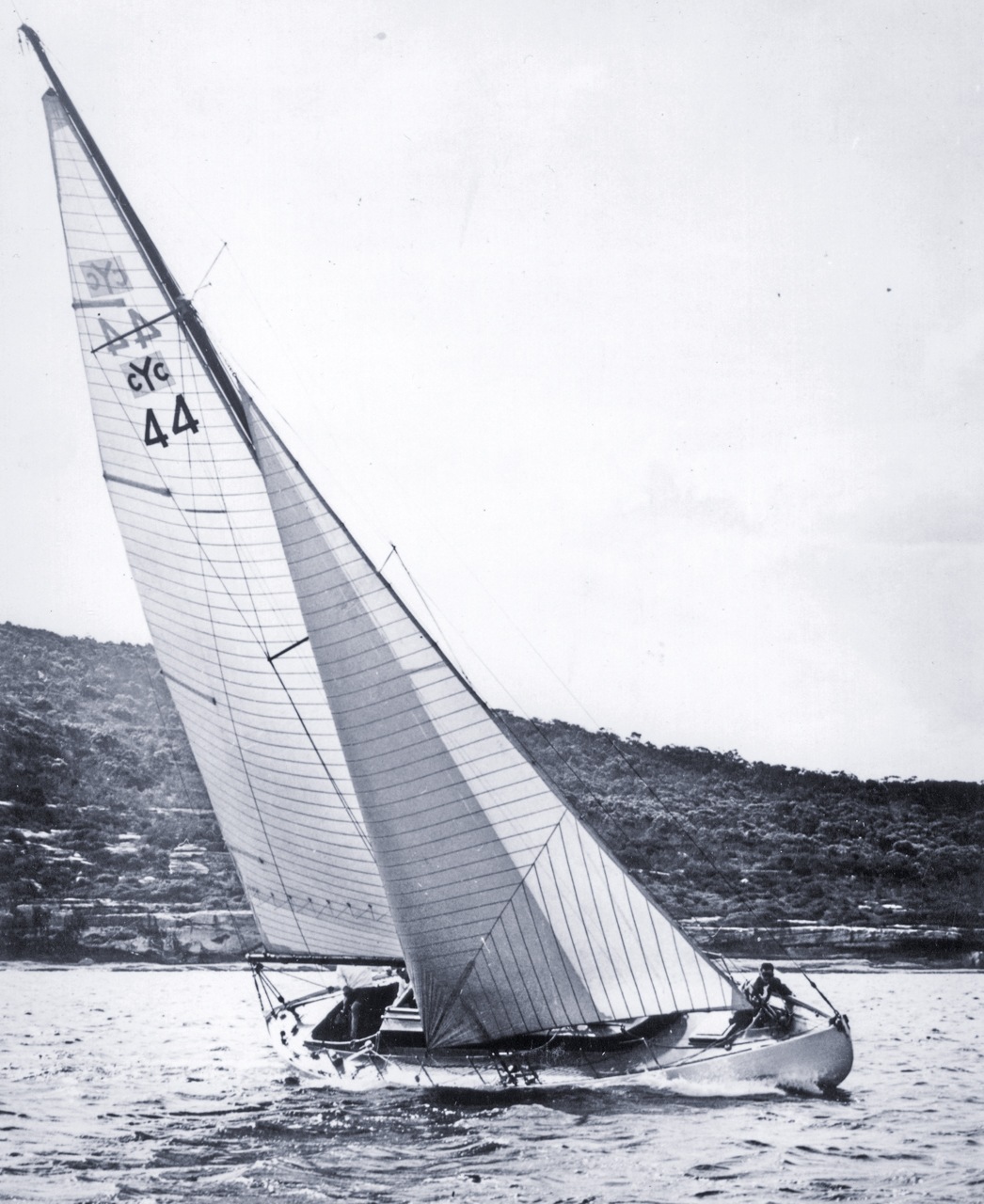 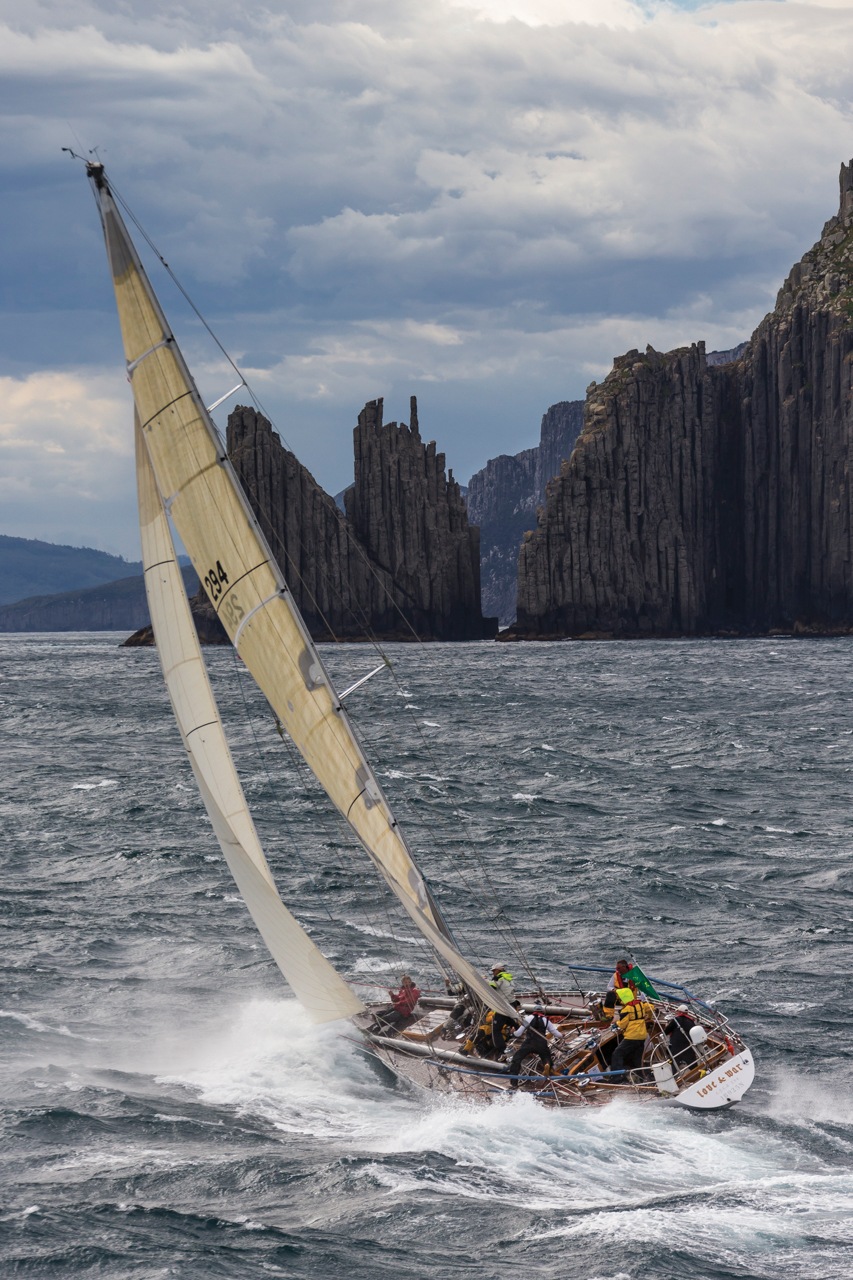 A rule begging to be broken
The rule makers for all their great intentions of equalising boats, ultimately tend to penalise performance. So, if you are penalising performance, how do you niggle around that?

Well with the International Offshore Rule or (IOR), the pinched transoms is a classic example. It was pretty well understood by the rule makers that wider transoms and fuller aft ends were faster, so they measured that area carefully and penalised you for being too full.

The designers thought well let’s have a look at that, and they kept pinching and pinching and pinching the sterns and trying to fake the water out and putting duck bills up the back which made for boats that were slower but rated well; and were really, really unpleasant to sail downwind in heavy breeze.

It’s very difficult to turn the adjustment knobs as a rating office to get it to go. Staying with that and that particular issue, let’s let the boats get wider, and rate it but not over rate it. That’s really hard.

The IOR guys were juggling so many issues, you had pinched transoms and effectively you were getting toward chined hull forms because those were the measurement points. They were effectively trying to measure displacement without weighing the boats.

So we had boats that are basically chined, one, two, three, four points, were measuring points that they used to calculate the midship section and then calculate the displacement, and then the designers figured out if you just go straight between them you get a higher displacement on balance, you win boat races on handicap, well, we all know that’s not a fast design, you know to have boats that have bumps all over them, and that’s just really – and then the IOR guys – they were juggling that, they were juggling a whole bunch of issues, they couldn’t keep up with it, and they weren’t letting the progression happen fast enough.

IMS (International Measurement System) started life as a research project at MIT and was an attempt to take a yacht and predict its performance. It wasn’t intended at the outset to be a rating rule, it was intended just to see if engineering could actually predict the performance of a yacht.

So, they wrote this program and then all of a sudden someone at US IRU said let’s turn this into a rating rule. The format that they proposed was really no more than time trialling, the way it was set up, being basically a VPP (Velocity Projection Program).

The only way to apply it fairly, was to apply it to each boat individually with a record of their wins and see how they won against their own performance, and so as we all know, the rating system was just crazy.

With IMS they tended to smack you for being stiff. So, if you were a nice stiff boat you really got hanged. Length and righting moment are the things that make a boat fast and will get you a long way down the track without having to be too subtle about things. The boats were tender, and that’s not a good thing either, so the boats were really working hard and you had to hike them down. 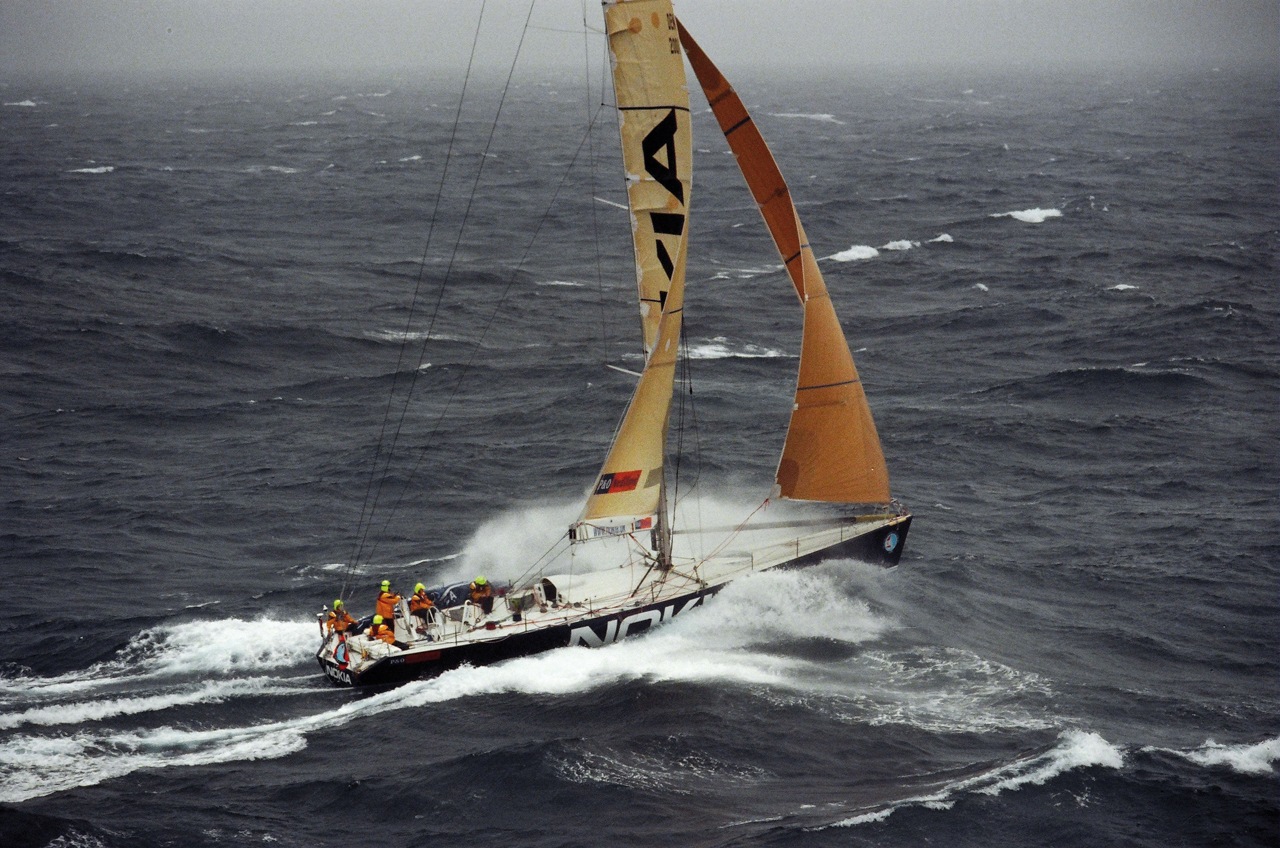 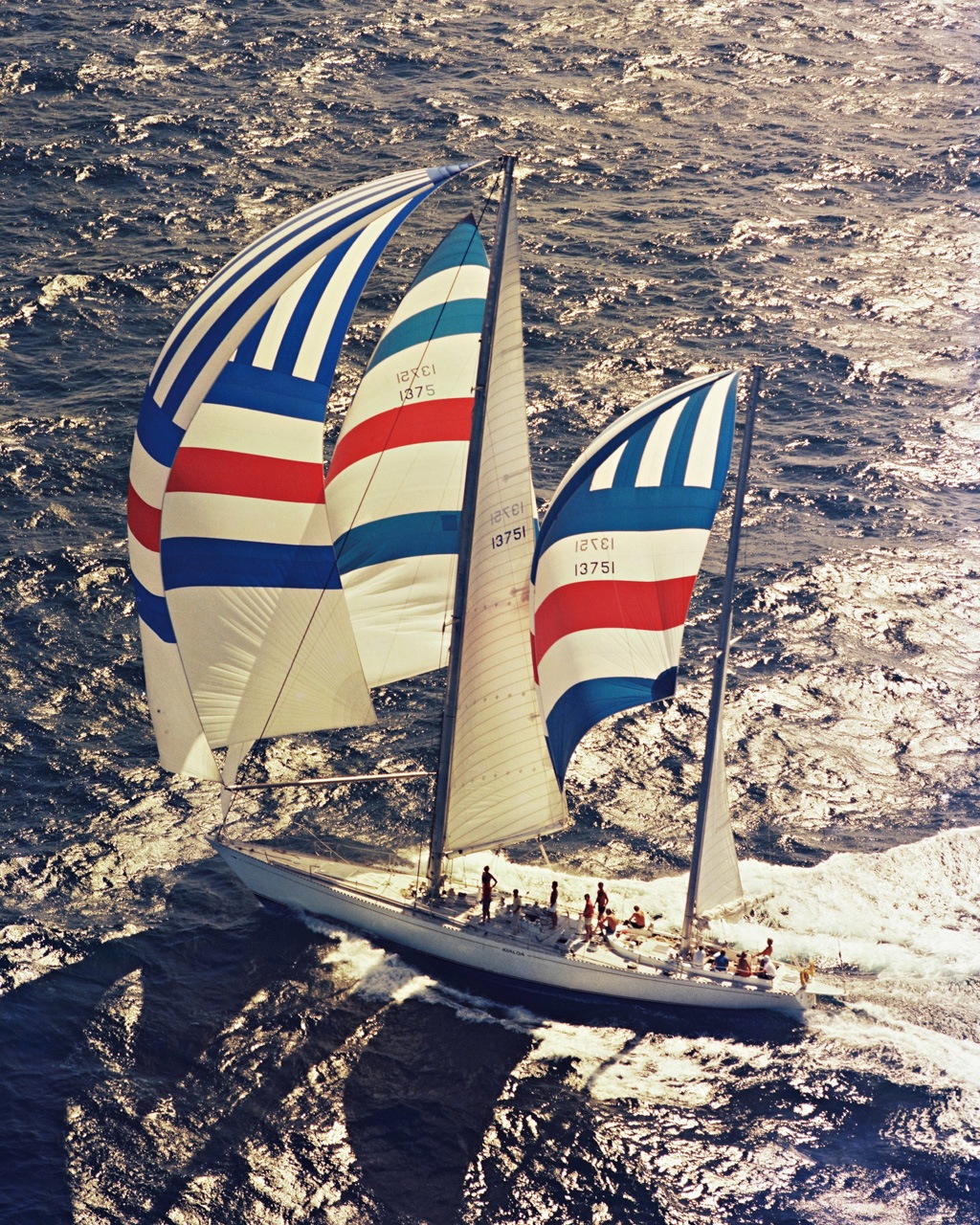 Winning design dividend
Raptor (1994 overall winner), came at the end of IOR era, and the start of IMS.

Why did we do well? Well, I mean Ian Bashford was there. It wasn’t the boat builder it was just that Ian Bashford was the guy that pushed like crazy. He just pushed through and a very talented yachtsman.  The boat was very well built and we didn’t do anything too sneaky. It was the early days of the IMS, and we did a pretty good job of interpreting the rule I think, so the boat was medium displacement.

We certainly didn’t target a corner of the rule because that boat was meant to be a production boat for all over the world, and it was meant to be addressing both IMS and at the time CHS (Channel Handicap System), which was very popular.  A lot of the clients that Ian Bashford had were guys in the UK, so we had to address both. We would have liked to have been maybe a little bit lighter, but we couldn’t do that so we went to a medium displacement at the time which was about a six tonne 40-footer.

But what we did do interestingly, was go with the mast head rig on that boat. Because fracs were all the go and I can’t remember but I think we found that there was a little bit of a weakness in the IMS rule for the masthead rig, and for the light air scenario of getting up the Derwent we really liked the idea of the big 140, 150 percent overlapping headsail, you know, basically code zero. when code zeros weren’t around.

Ultimately those boats all ended up in light air upwind downwind venues, several of them ended-up in Chicago doing really well, where it’s upwind/down wind, light air venues. It’s interesting how boats find their way to their best venue.

It was a bulb keel, a reasonably fine profile keel, but forgiving. The bulb on the bottom, the IMS bulbs, were tortured; they were all twisting shapes. Under IMS you had these triangular bulbs because the rule demanded it. If you went round, you got smacked. So, to avoid the “bulb definition” you faired them out this way, even though they were very much a bulb, you were distorting them. So that’s probably one reason why we did ok, we worked around the rule on that bulb.

The TP era and beyond
52 feet is a really nice sized boat, but whenever you put a lot of energy into boats that are similar, then a lot of issues, a lot of development stuff is not right, and in the TP class that’s the case. Even the box rule trade-offs get refined because they’re racing intensely against one another.

They’re super fine tuned. The bottom line is the TP52’s are sailing at 99 per cent of their potential, whereas your average 40-footer is probably sailing at about 75 percent because he’s got no one else just like him right there.

So, in the TPs  you get two boats side by side and they’re identical in every way except one’s got a six-inch deeper keel and so all of a sudden it becomes very apparent what that’s worth. Everybody goes that way, and then the next guy comes along and he does one more thing and that becomes the thing.

That’s generally a really healthy thing, and I don’t know if box rules are the right answer, but certainly it leaves a lot of stuff open so the designers can do what they do best, which is make a fast boat. 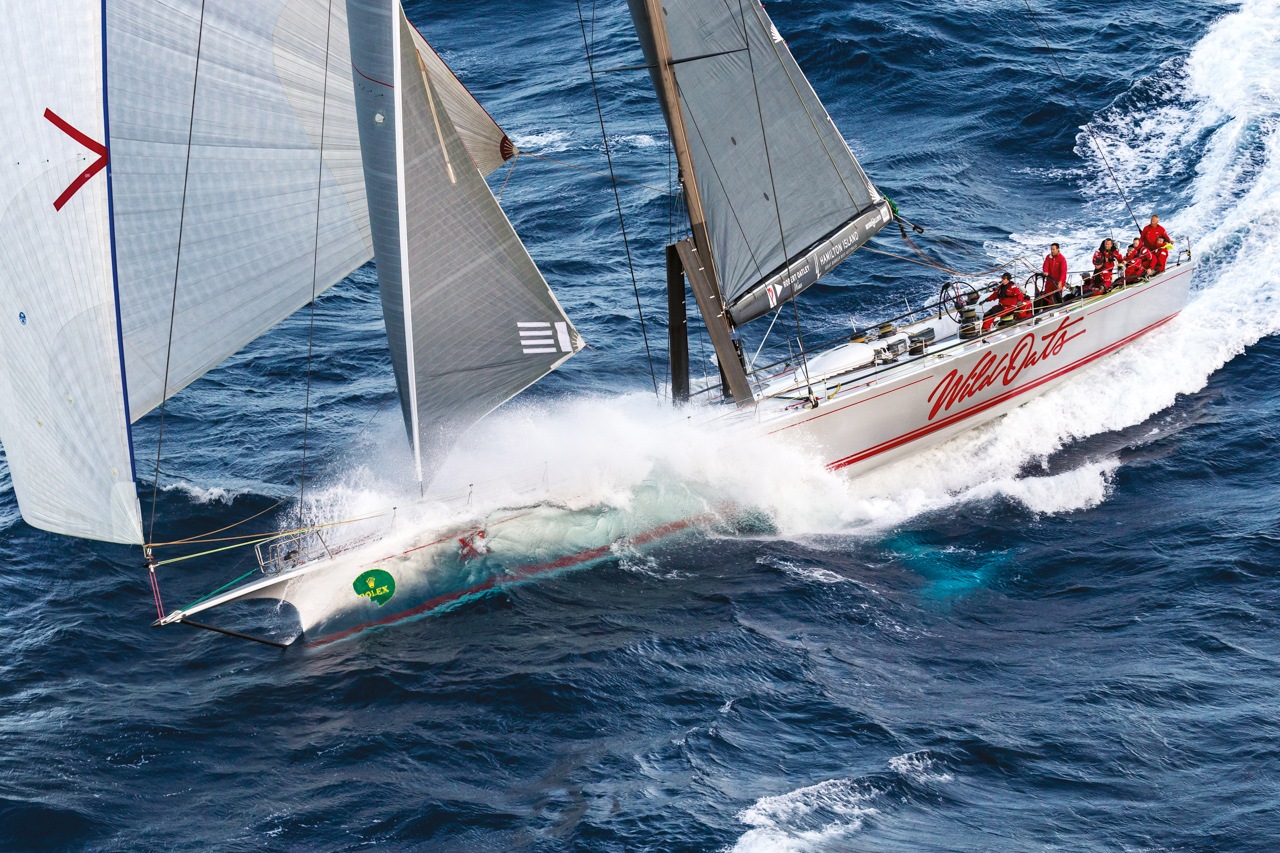 Foiling for the masses?
Foiling and sailing is like trying to fly a 747 within a foot of altitude. It’s incredibly difficult.  If you get it wrong with a yacht and it lifts too much, the foils come out of the water and you crash. If you are flying level and you dip downwards, you just crash into the water.

As the speeds go up, the crashes get more dramatic, people are going to get hurt, that’s my biggest concern.  I don’t believe that you can make something stable enough in flight on its own, that your average yacht club sailor will be able to sail on it.

The issue with the Vendee Globe and The Ocean Race foiling I think and it and it worries me is when they on auto pilot when they are foiling nearly all the time. Those guys have to sleep. If they get into conditions that are a little bit more severe than the last time (2106) they set the program up, it gets gazumped and down you go. They have a big crash and the skipper gets hurt.

It’s extremely exciting, but unfortunately, we are not all Glenn Ashby.