The two new projects were announced at the Genoa Boat Show and the Cannes Yachting Festival, under the Italia Yachts brand, with a warm reception from media and yacht connoisseurs.

Led by Maurizio Cossutti, the design studio has been in operation since 2008 and aims to create vessels that are “a perfect synthesis between creative ‘madness’ and design concreteness”.

“The signature behind each and every project is the tireless pursuit of an ideal: the creation of high-performance craft that are structurally reliable, easy to govern, with light displacement and distinctive design.”

The great history of Italia Yachts evolves and the new IY 12.98 takes up two challenges in one: the prestigious heritage of the Fuoriserie line and the elegance of the Bellissima line.

The new design is a boat with sporting ambitions, but still usable on a cruise. The project was presented at the Genoa Boat Show 2021. 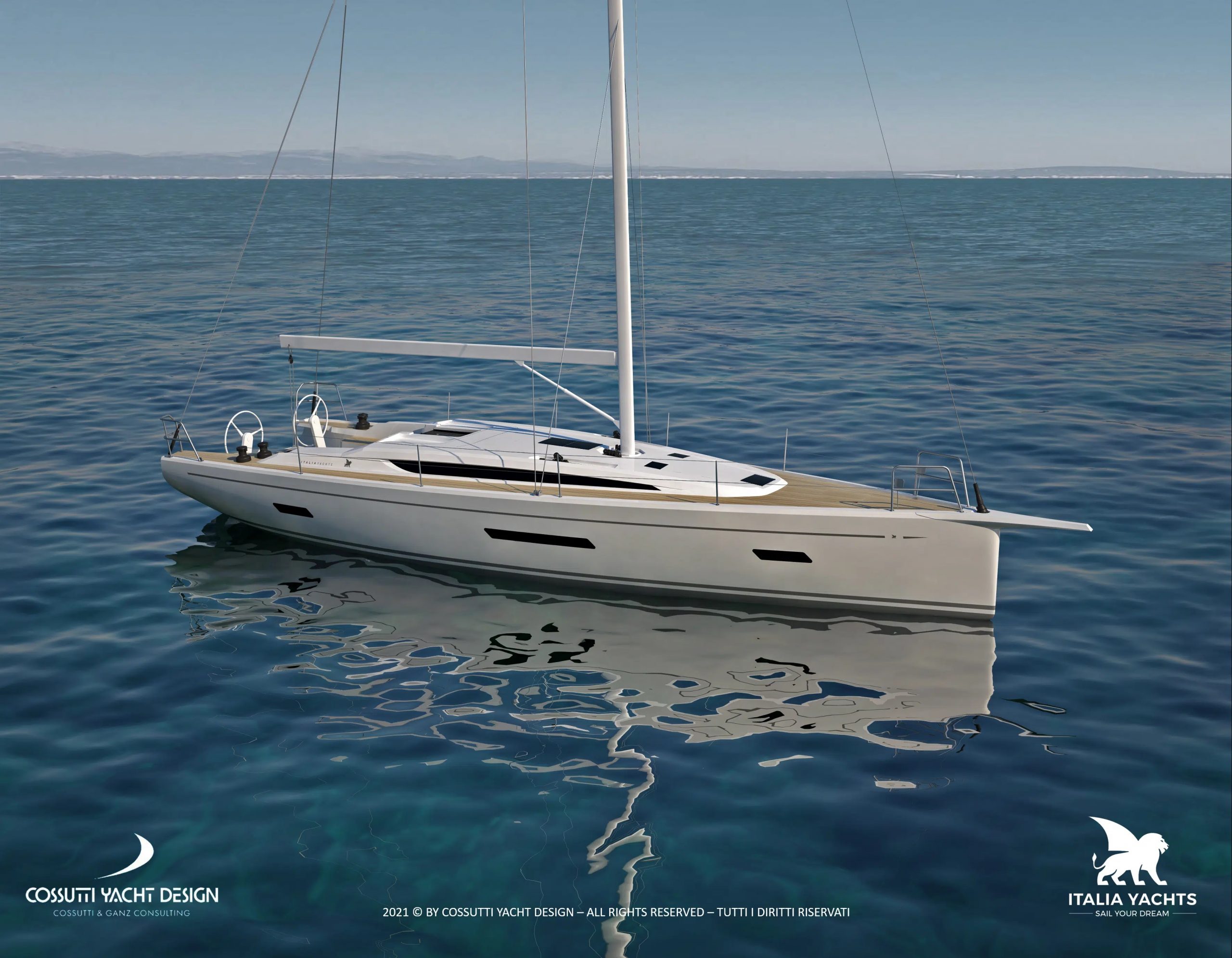 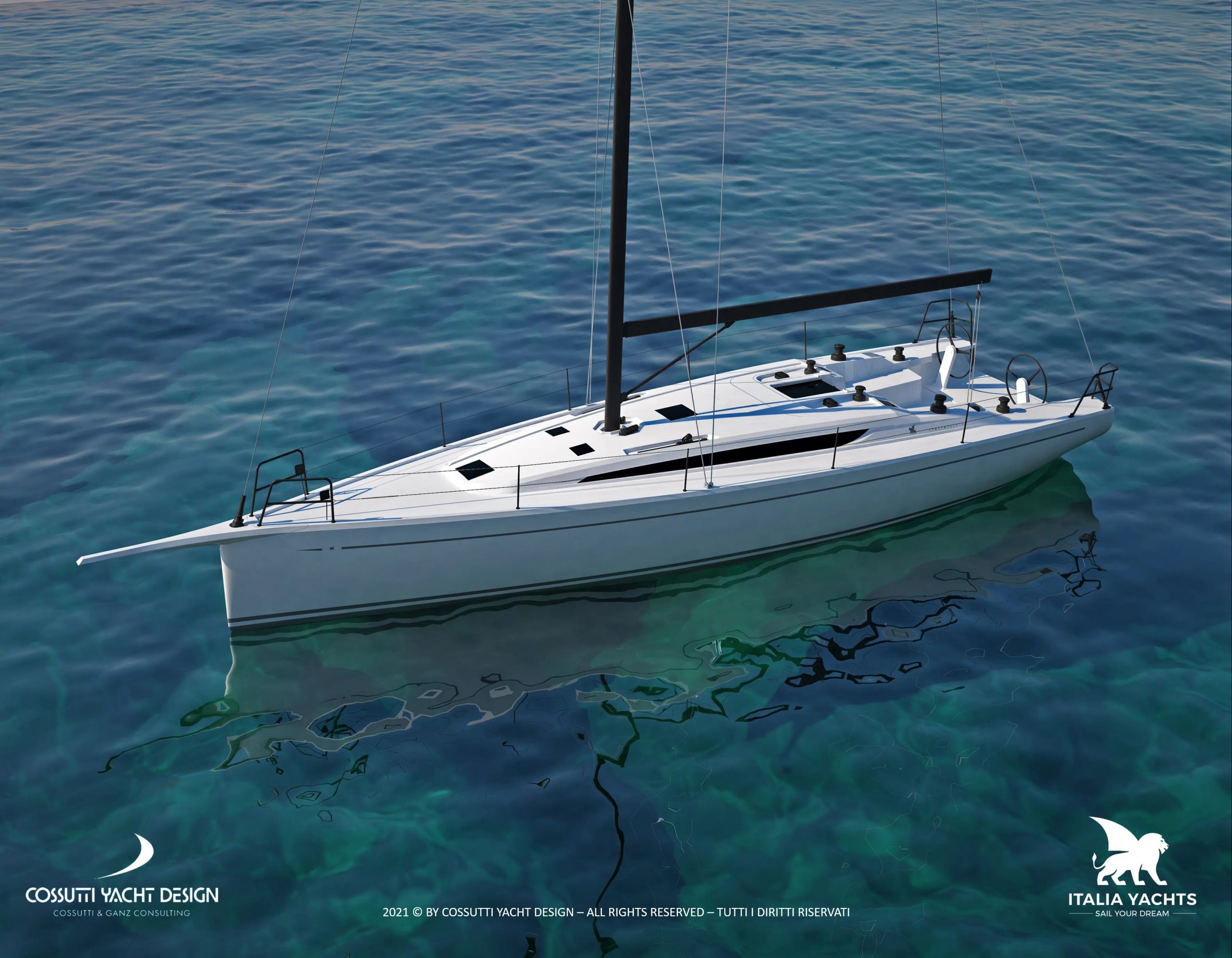 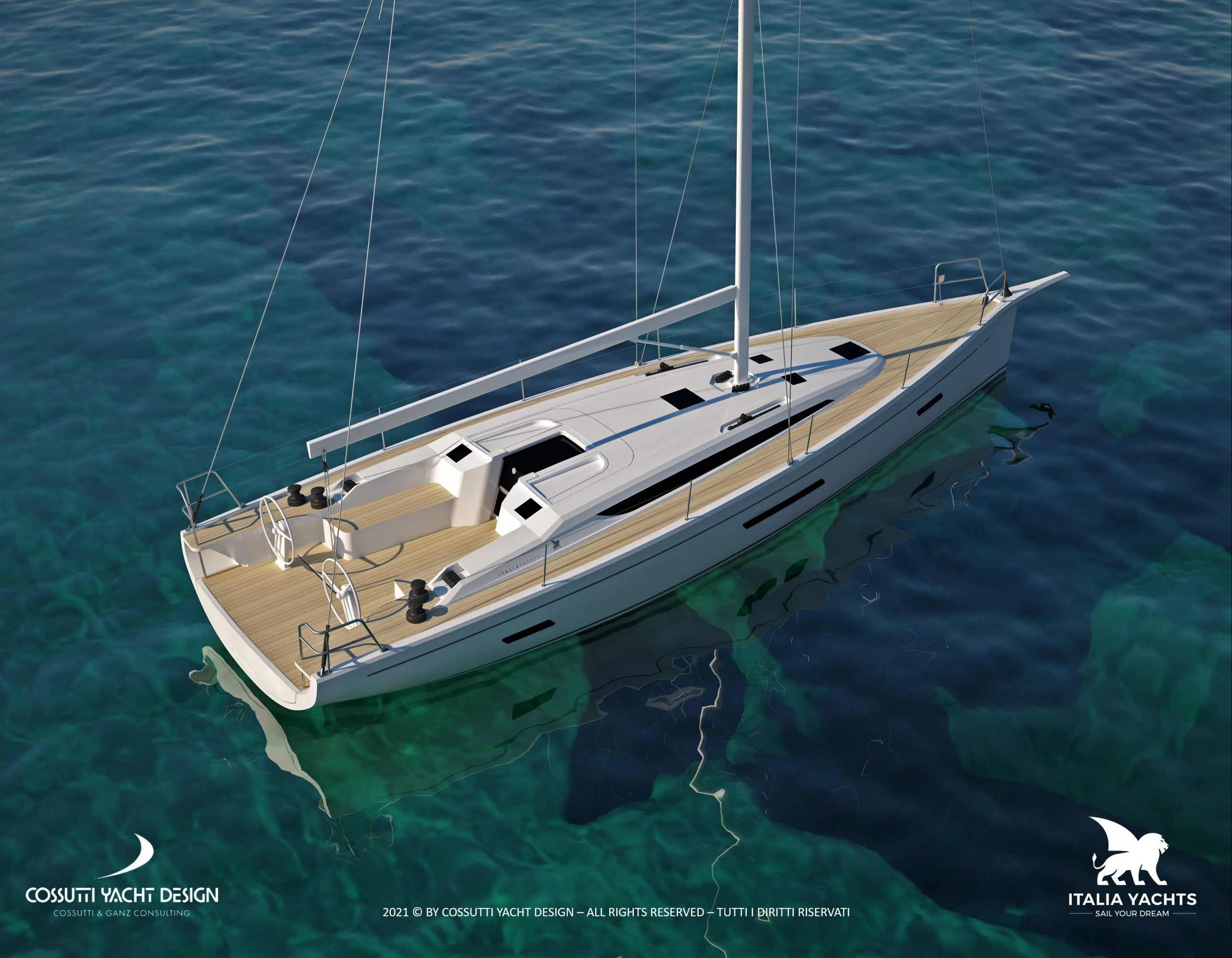 The exterior design develops the lines of the previous models in a combination of sportiness and elegance. It maintains the characteristic eyebrows on the deckhouse side, merged now with the big single window and the chamfer typical of the Fuoriserie line and of the IY 14.98, the latest model launched by the yard.

Like every Italia Yachts, there is an obsessive attention to the development of the deck plans of both the Bellissima and the Fuoriserie versions.

Whatever the version, the deck must remain usable in all wind and sea conditions, and all must work perfectly. For this reason, the path of each line manoeuvre has been studied in detail, considering the dimensions and ergonomics necessary for its usability, without forgetting to integrate the necessary recesses and supports within the overall design of the deck.

There are two versions of the IY 12.98, the Fuoriserie without the hull windows and the teak deck, and the Bellissima version with all the accessories.

But the differences between the two versions go far beyond that. The substantial difference is in fact in the ergonomics of the cockpit: the racing version has a traditional winch layout, with halyards on the deckhouse, jib sheet on the coaming and mainsheet on deck; the Bellissima version, on the other hand, has all the same manoeuvres aft of the coaming, leaving the seating area free to enjoy the experience on board in total relaxation.

Every new boat is a challenge, but the new Italia Yachts 12.98 is in a particular way. In the case of the 14.98 we had talked about a hypothesis of 20 percent competitive and 80 percent cruise use, in practice the opposite of the 11.98, and therefore the Fuoriserie and Bellissima versions were conceived accordingly. The new IY 12.98, on the other hand, will be a 50-50 competitive-cruise use. The goal is to be competitive at the top level with the Fuoriserie version (we mean World and National Championships) and, at the same time, in the Bellissima version to have better characteristics for cruise use compared to the current 12.98.

For this reason, at the beginning of the project we made an accurate analysis of the displacement range that could be the best compromise between performance and rating, but at the same time it was fine for a Bellissima version with richer and more complete set-ups.

On this basis, having decided on the hull length of 13.16-metres, we opted for a reduced maximum width to have a hull that had the least hydrodynamic resistance, that moved easily and therefore agile in medium-light conditions but capable of expressing high potential speeds with sustained wind.

An accurate analysis of the toughest competitors in the B ORC class was the basis for conducting an in-depth CFD fluid dynamics study with the support of the team of Giorgio Provinciali and Simone Bartesaghi (both with experiences in the America’s Cup and high-performance boats), comparing the new 12.98 with competitors.

We are convinced that the new IY 12.98 will be a performing hull upwind and with rapid acceleration, a fundamental advantage in windward-leeward regattas, allowing optimal downwind navigations both with gennaker or more traditional spinnakers.

The sail plan has several options, with traditional, semi-square or true square top mainsail coupled to the double backstay, standard or long bowsprit to maximise the size of the gennaker, but also the possibility of having a self-tacking jib for a truly easy sailing configuration.

For the carbon mast option, Italia Yachts is working with Hall Spars to have a customized profile for our needs. The racing version has a 2.5-metre steel keel with lead torpedo.

The Bellissima keel has a draft of 2.30-metres and it is in full lead with steel structure. There will also be a fixed keel option with reduced draft, especially for the Northern European and US markets. 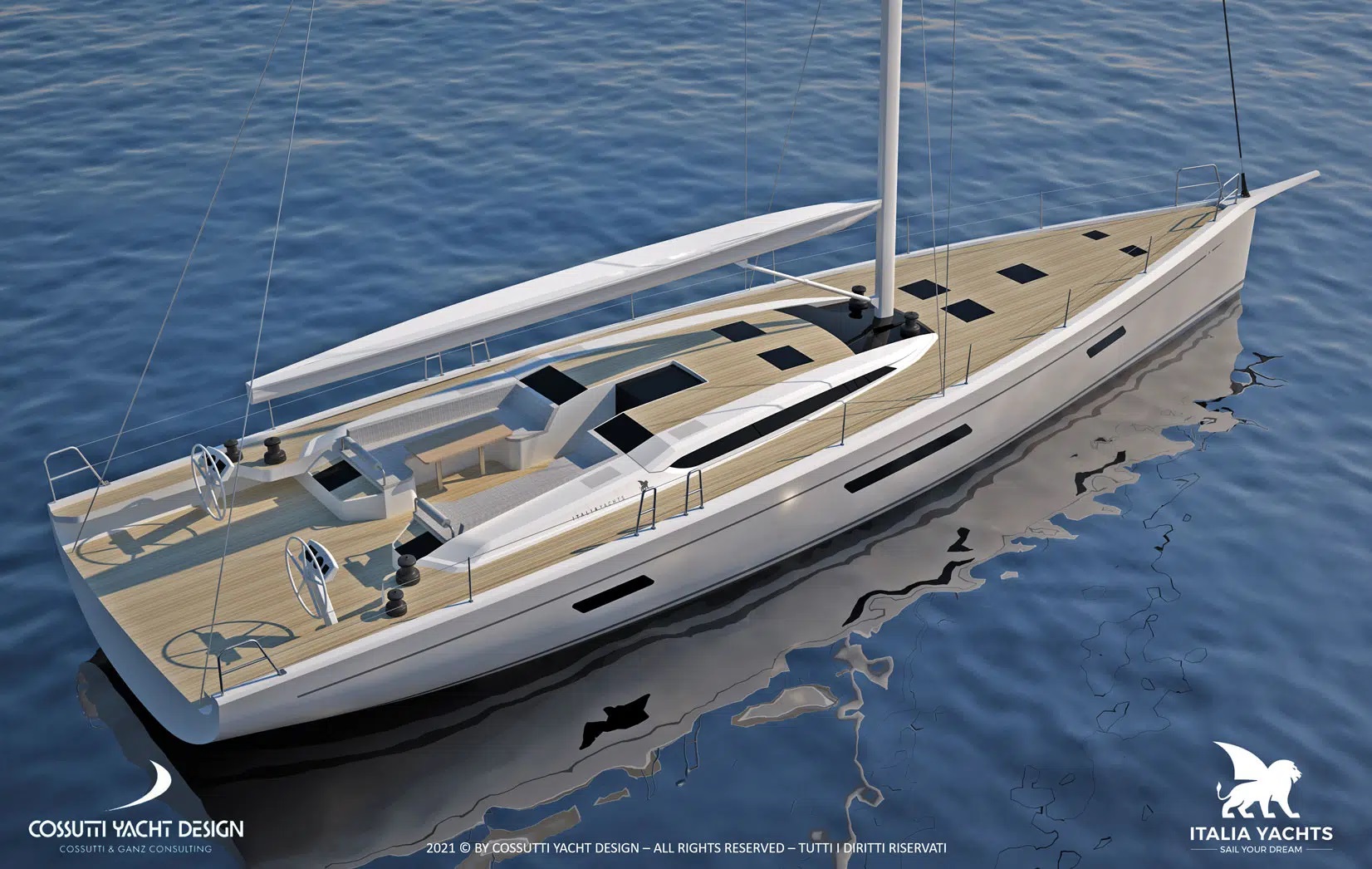 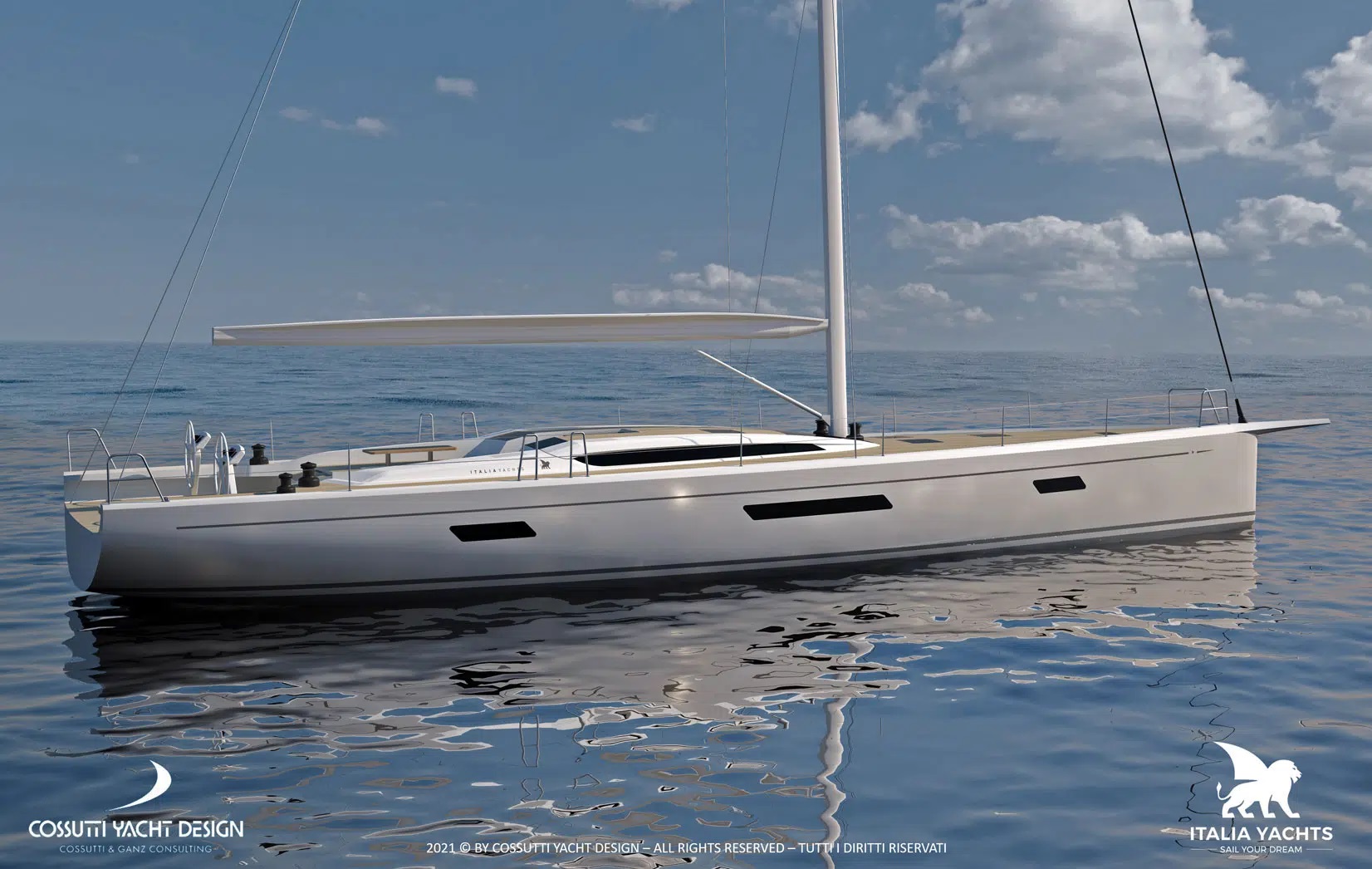 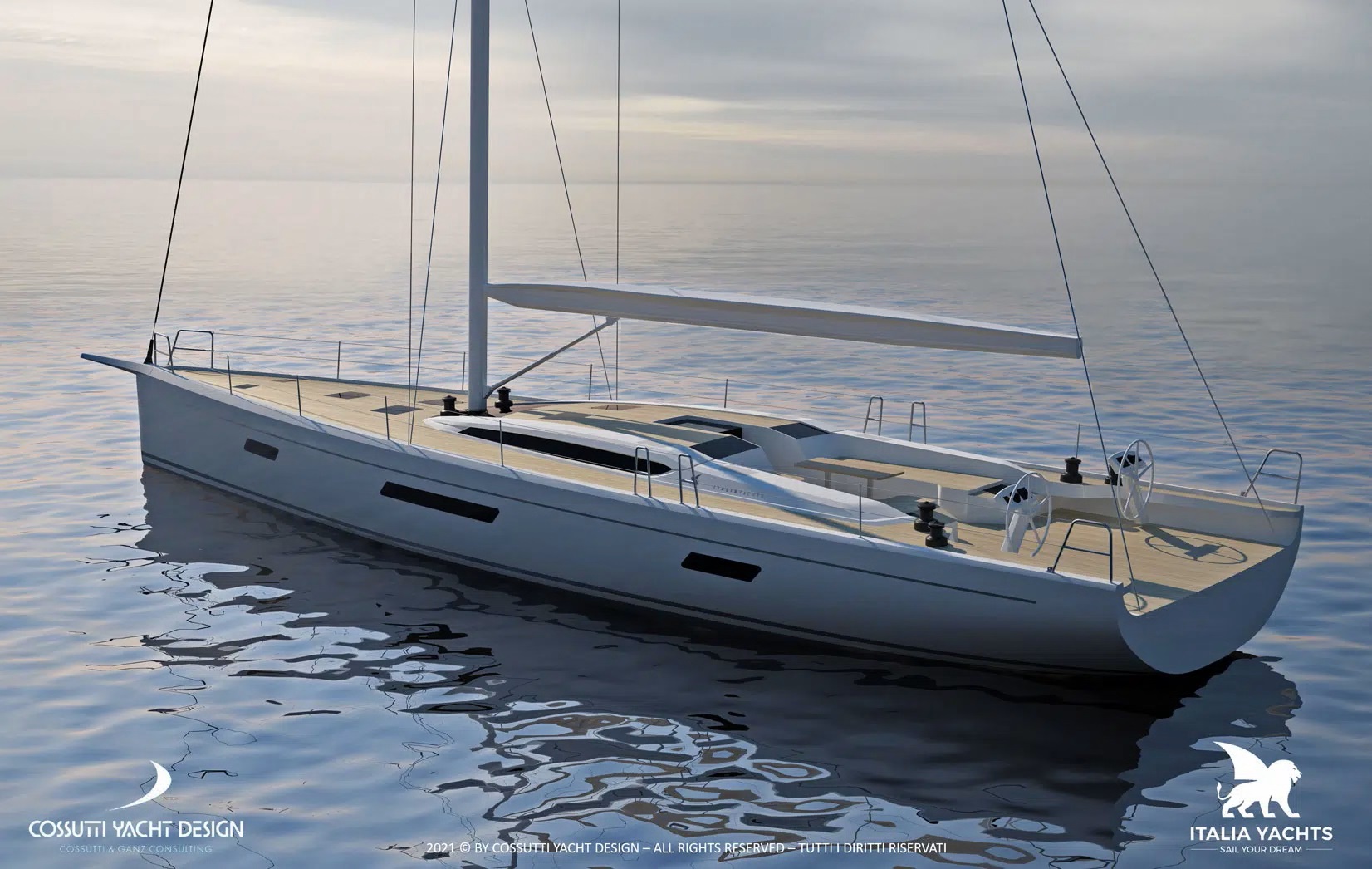 The Italia Yachts 20.98 boasts classic, contemporary lines and is positioned as “the new Mini Maxi”, expands the range upwards, with a hull in line with the fleet already produced up to 55-feet. This is the fourth model born from the partnership between our studio and the Venetian shipyard after IY 10.98, IY 13.98 and IY 14.98. The Italia Yachts 20.98 project was previewed to the press at the Cannes Yachting Festival 2021.

To meet the shipyard’s requests, the design focused on evolving the two souls of Italia Yachts, Bellissima and Fuoriserie, into a form that could fully represent the distinctive characteristics of the brand.

The hull will be tapered designed to have a slender and elegant line, to charm you while sailing. Those who choose an Italia Yachts today expect something more in terms of performance and this project will not betray the expectations of the most demanding owners, while cruising or racing in the most competitive regattas.

The hull is technologically advanced, with optical fibers lamination, thanks to the collaboration with B&G, Volvo and Allspar and some of the most advanced research centers in the infusion lamination sector.

Italia Yacht 20.98 will be a “green boat” in terms of reduced consumption and equipped (optional) with a lifting keel for navigation on different waters.

Brilliant performance in light winds and pure fun in steering IY 20.98 thanks to the new sail plan, while the geometry of the hull guarantees advanced stability and absolute safety in case of high winds, that distinguishes the Italia Yachts range.

The project is designed for navigation with a “mixed crew”, sailors and guests, the halyards are managed by winches at the mast foot while the winches are positioned at the stern for adjusting the sheets, for perfect handling even with a small crew.

On deck, the living spaces are ample and there are hatches and large windows to ensure a beautiful natural light in the interior. The cockpit is comfortable and welcoming, the guests will be able to move easily in the external / internal passage thanks to the free walkway, left by the off-centre table on the left side.

The interiors are the result of ergonomics and design studies that match the use of new high standards materials with the utmost attention to weight to create a luxury style spaces on board. Another interesting news concerns the layout which can be customised, also by mixing the options already provided: one of these sees the creation of a kitchen-living room, usually used in larger boats and a reserved crew area, aft.