Indomitable adventurer, Lisa Blair and her Hick 50, Climate Action Now, are undertaking major refit works in preparation for her next World Record attempt.

Indomitable adventurer, Lisa Blair and her Hick 50, Climate Action Now, the 15.25-metre Robert Hick-designed yacht are docked at Rivergate Marina & Shipyard, Brisbane for a series of works in preparation for her next World Record attempt.

Formerly named Funnel Web, the vessel will undergo a complete overhaul with new bearings, rigging, hull-fittings, electronics and more, as well as a system check ahead of its planned launch in September.

The yacht is on the hardstand where every system will be tested, inspected, overhauled and improved upon.

“It’s a huge undertaking covering everything you can think of to make sure it’s prepared for the next series of projects,” she says.

The first project Blair is referring to is her attempt at the Sydney to New Zealand record, where she aims to be the first woman to break the current 12-day record. 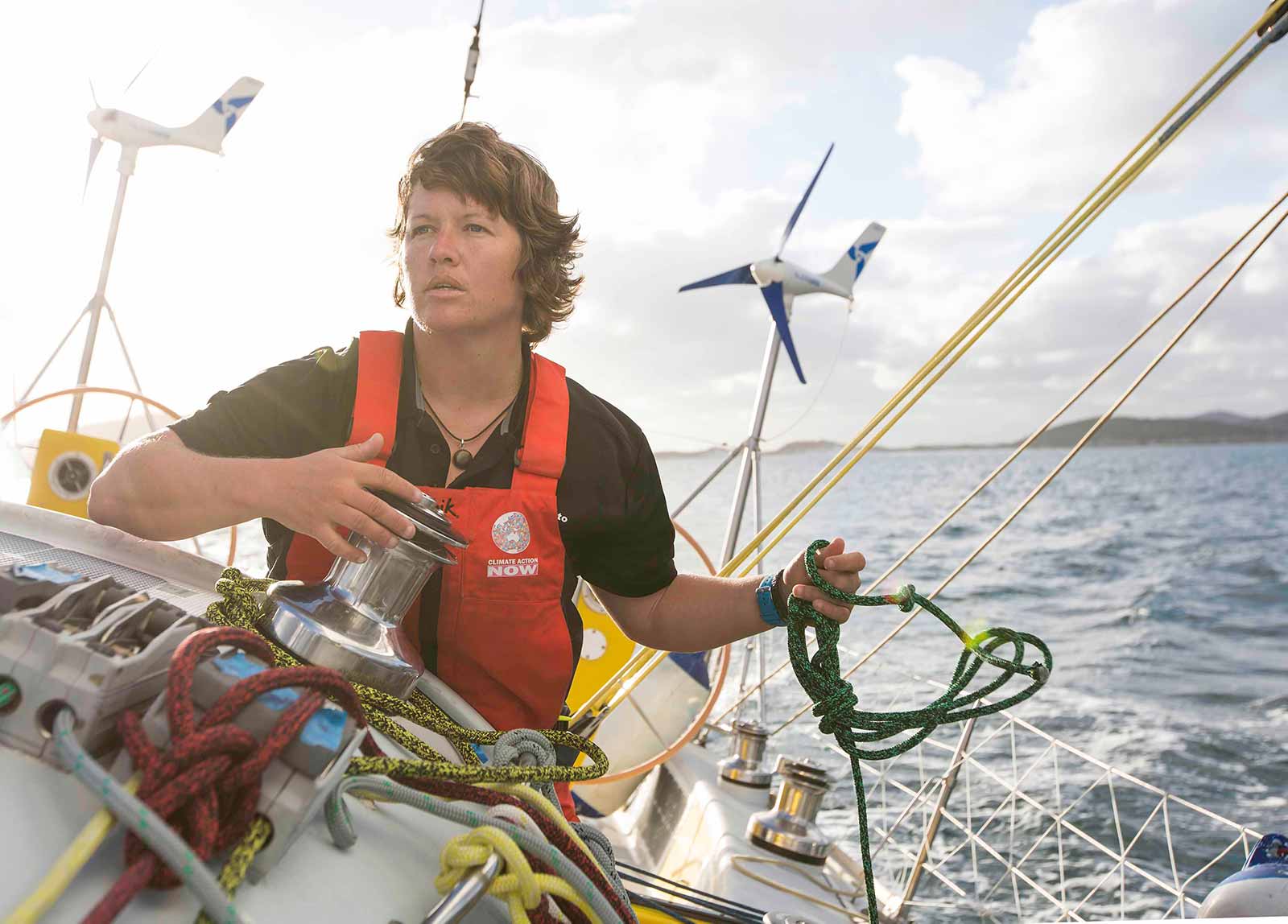 Lisa Blair sailing in the Antarctic. 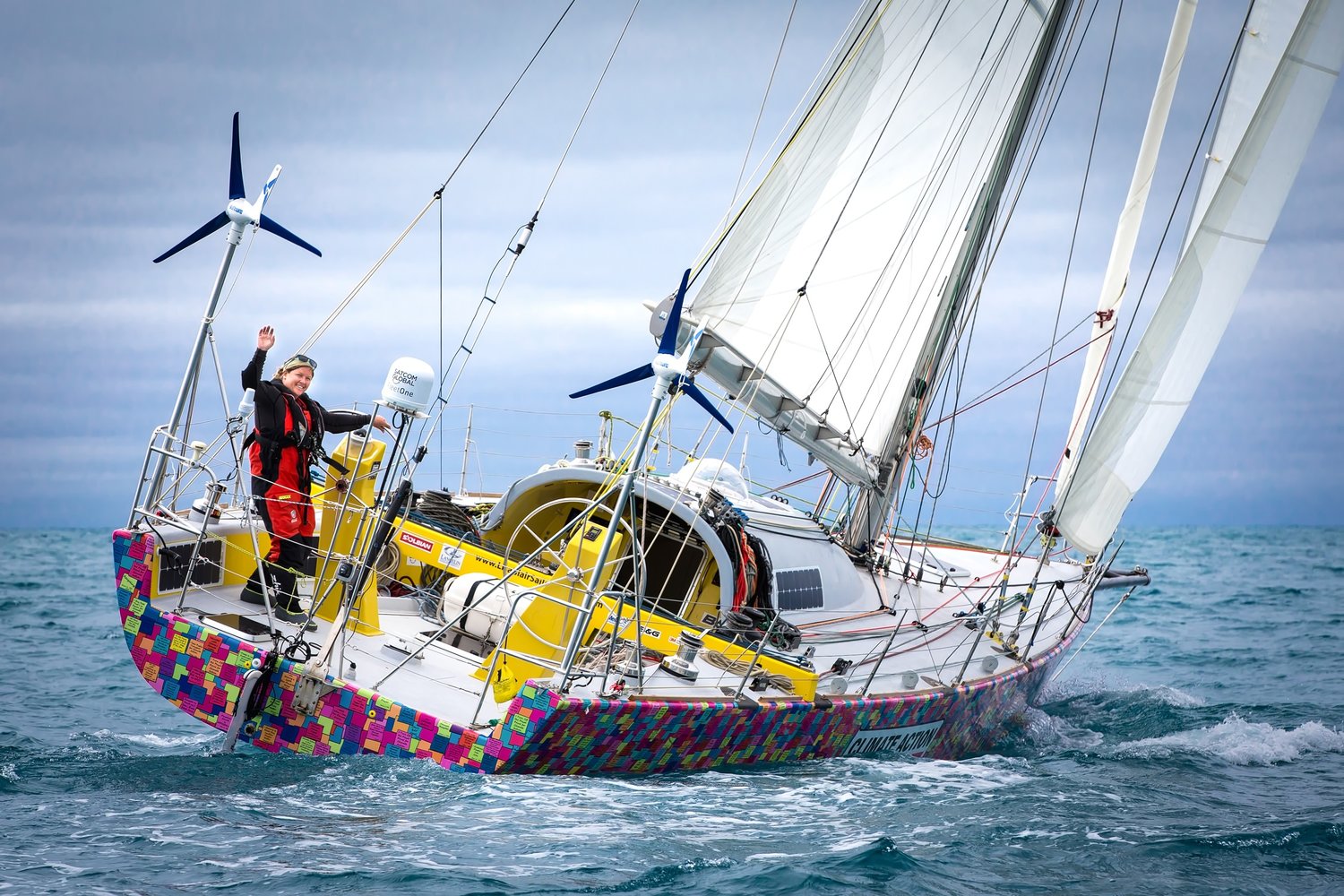 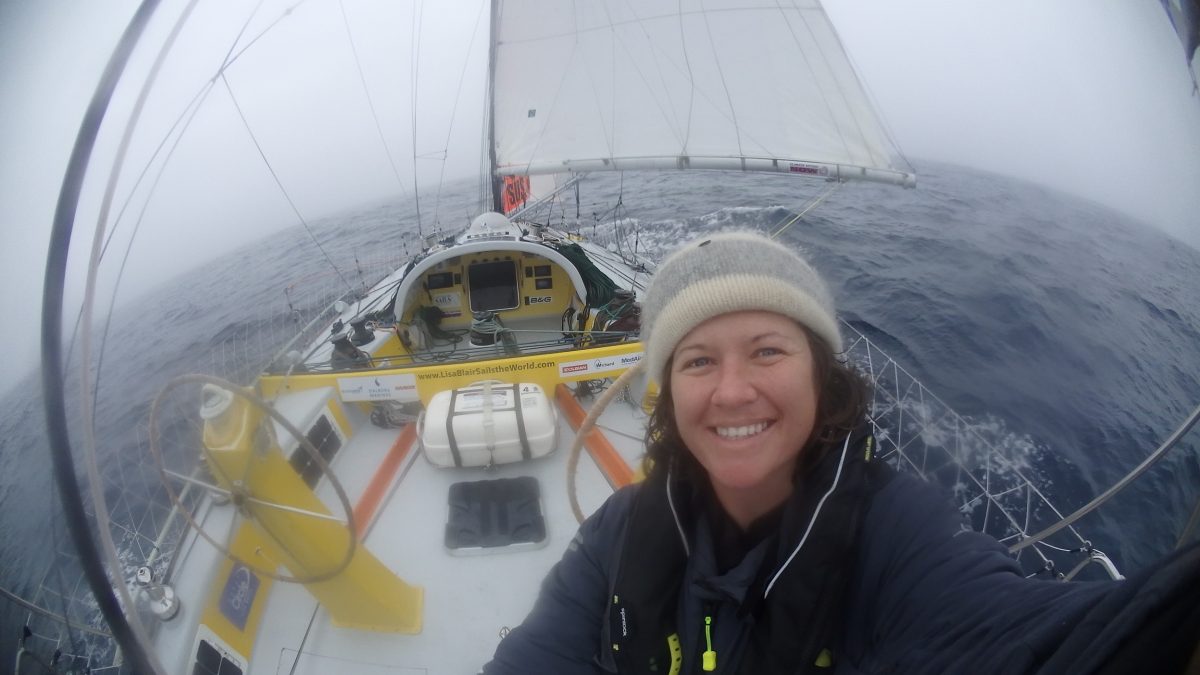 “If that’s not possible due to travel restrictions, I’ll do Sydney to Sydney via Lord Howe Island,” she continues. “It will be a great test run, a shakedown voyage for the boat and ideal for media opportunities.”

“Then in October, after putting the final touches on the boat, I’ll sail to Western Australia and prepare for my departure in mid to late December, depending on weather and conditions.”

The main event is her second attempt at sailing solo around Antarctica, where she aims to complete the 14,000 nautical mile voyage in 90 days, well under the current record of 102 days held by Russian sailor Fedor Konyukhov.

In 2017, Blair made history, becoming the first woman to sail solo around Antarctica with one-stop – an emergency docking in Cape Town to repair a broken mast. In 2020, she published those experiences in a book titled Facing Fear, recounting the life-threatening challenges of her quest.

“My first record attempt was about me growing into my own as a sailor, as the first woman, and with the aim of breaking the speed record. But the dismasting put a spanner in the works,” she says.

“Writing the book was healing, and the Australia project allowed me to get my faith back and restore my trust in my boat again. It was always a niggling little thing, though, and I knew I’d be going back. I just needed some time to process the dismasting. It was a close call. The whole boat was upside down, and I had to battle snowstorms and blizzards.

“Now I’m ready, mentally and physically, to take on the challenge again.”

This spirit of adventure first took hold when she, having already clocked up 50,000 nautical miles since she began sailing in 2005, undertook the Clipper 2011-12 Round the World Yacht Race – then working with Alex Thomson Racing on their 60-foot racing yacht, Hugo Boss. 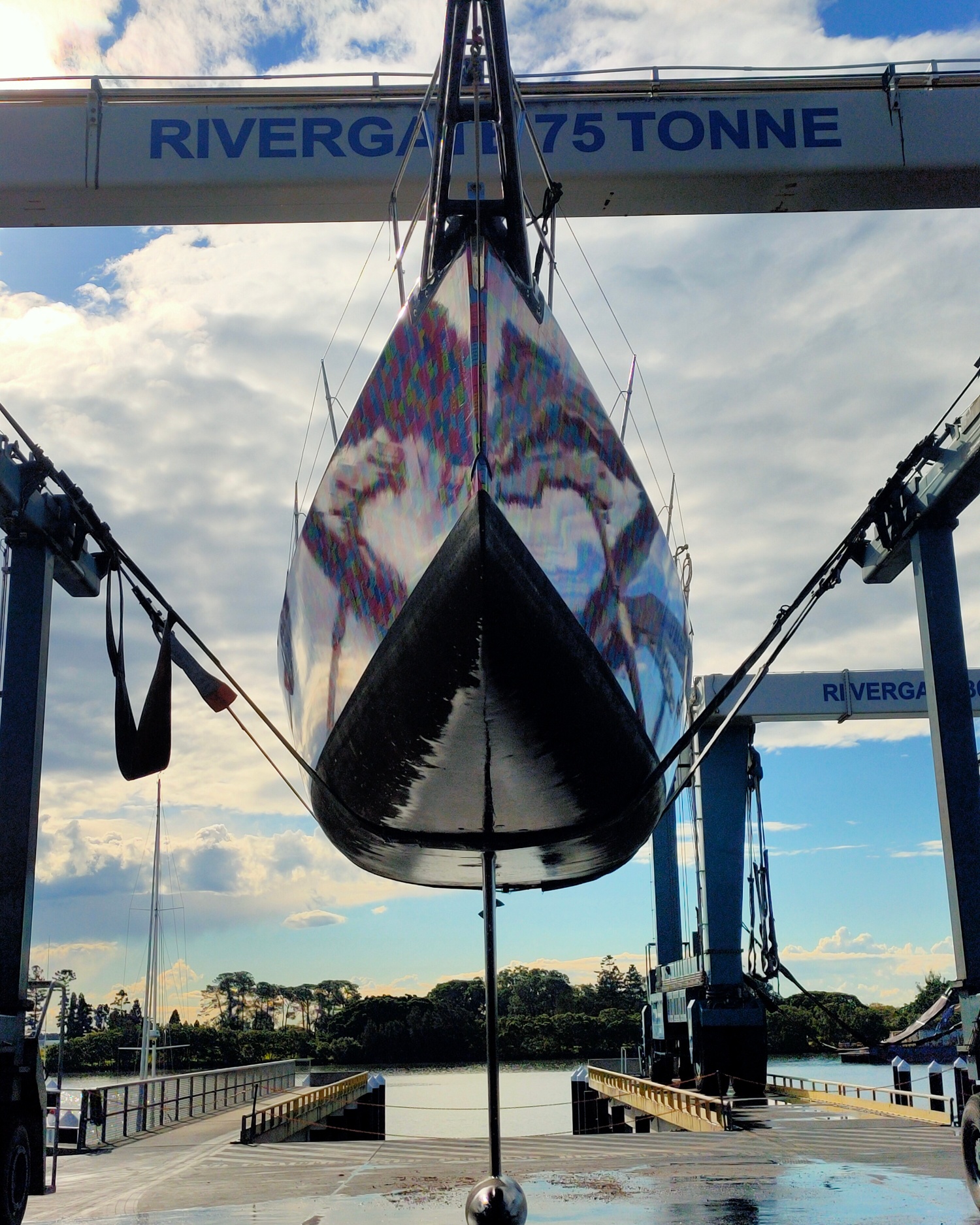 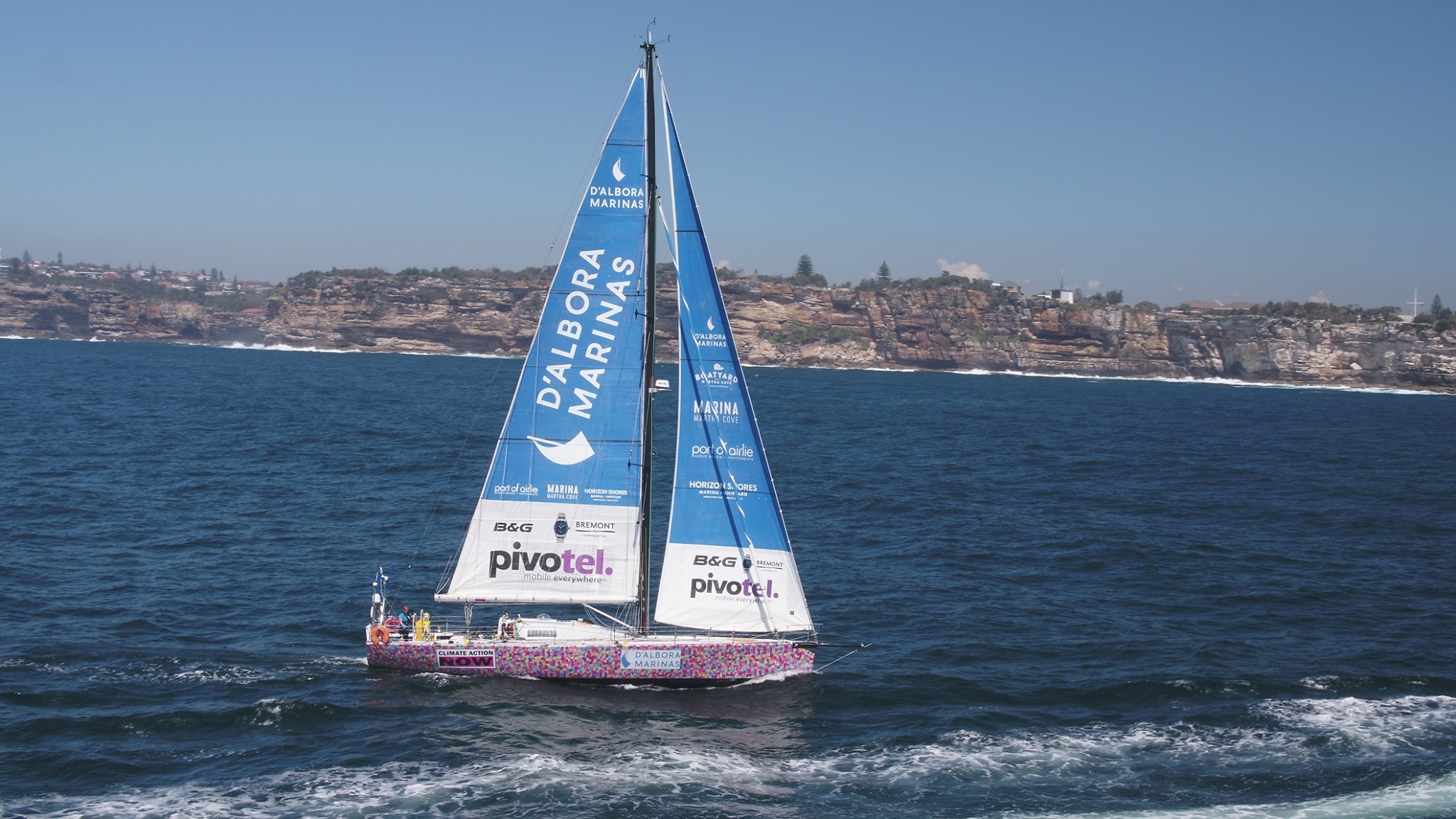 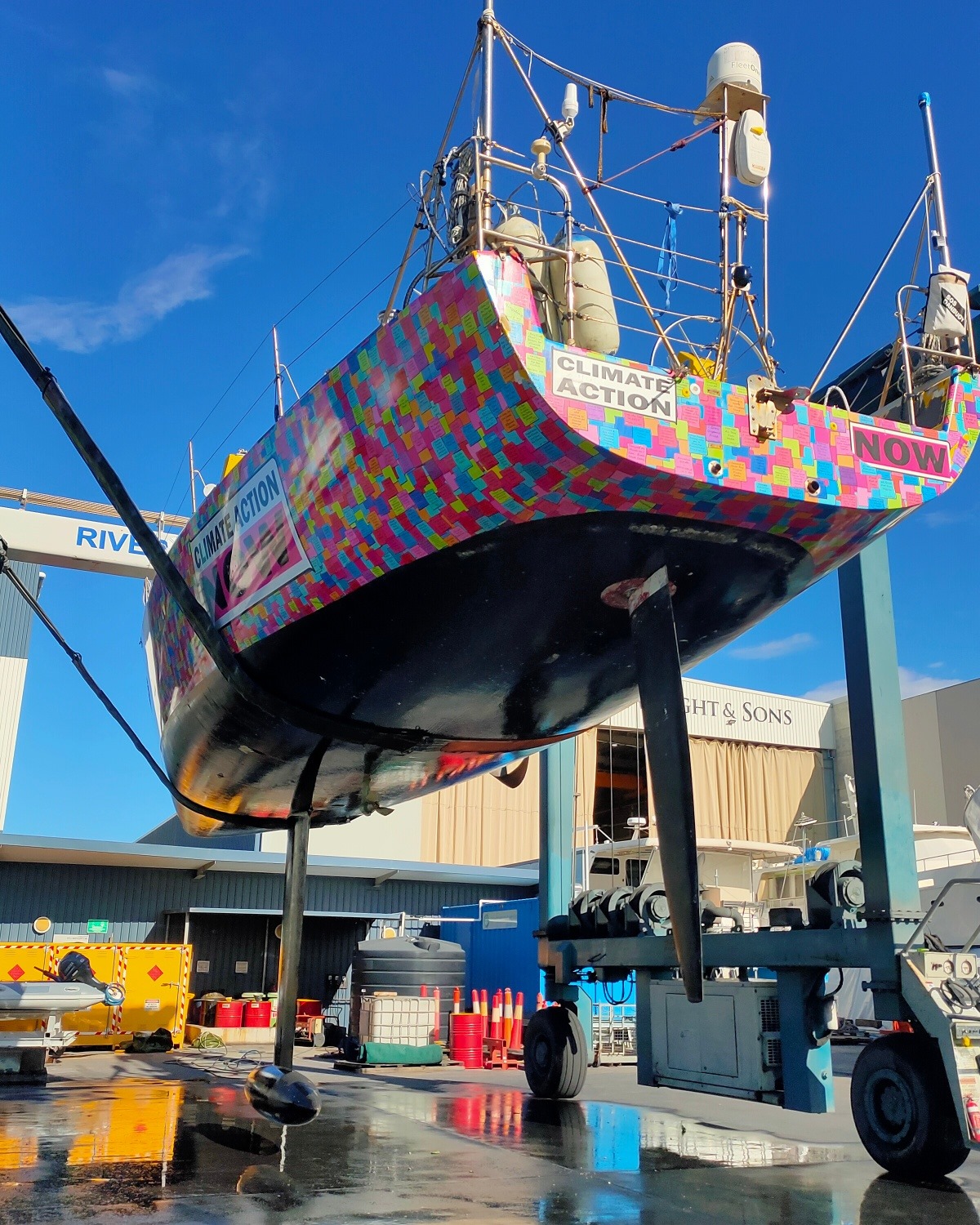 “To sail around the world was an immense achievement and I realised I was capable of doing anything,” she recounts. “At that point, I’d already had ideas of solo sailing and it’s just developed.”

She acquired her RYA/ MCA Yacht Master Offshore, a Master Class 5 (Australian Skipper ticket) and her MED 3 (Marine Engineering). In 2014, Blair sailed twice across the Tasman Sea from Australia to New Zealand solo, notching up 3,000 nautical miles of solo sailing.

The accomplishments are apparent. A sense of skill and drive that’s reflected in her second attempt to break the current Antarctic circumnavigation world record. But this attempt is accentuated by another, more urgent message, as printed on her Hick 50: Man-made climate change’s impact on the environment.

Paterson, who has been the Project Manager of Rivergate since 2013, says the team is enthusiastic about assisting and supporting Blair.

“We are providing free berthing, haul out, hardstand, and some of the costs of the scaffold. David Lambourne is helping out with the rigging. Blair is managing a lot of it herself because she’s very capable and because she needs to know every inch of the vessel.”

“They need specialist care,” explains Paterson on treating sailing yachts. “And Rivergate provides the deep-water access marina that sailing yachts require with their deep drafts. We have many experts on-site and contractors close by, such as sailmakers, spar specialists, special cranes to pull out masts and rigs, and deep-water travel lift pens. 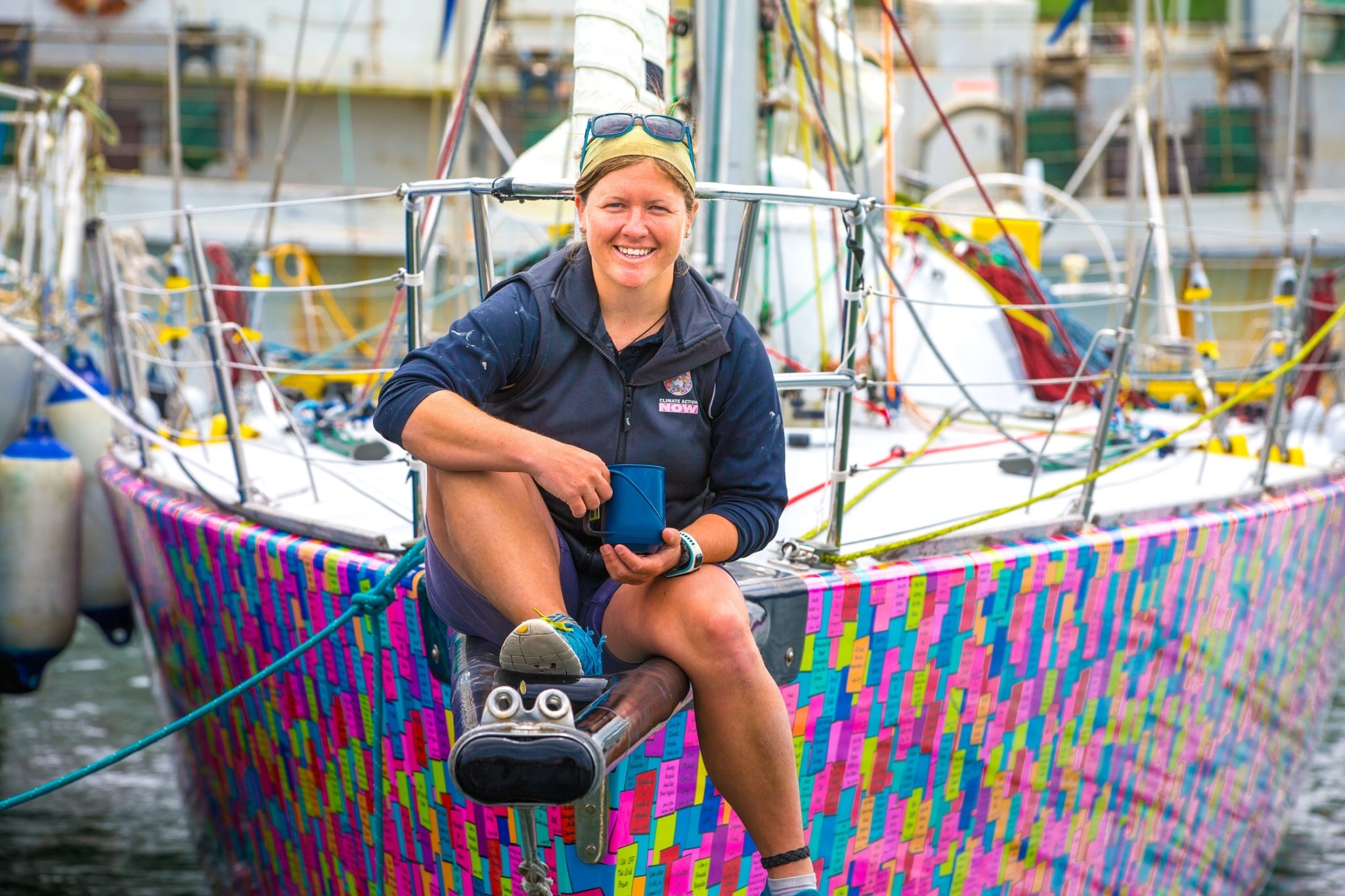 The brief delay hasn’t stifled her motto of how ‘doers change the world’, nor her determination to take the Antarctic record, despite the 80-knot wind gusts, 90-foot swells and temperatures of -20 degrees Celsius. The mission remains the same. Positive empowerment. Both for herself and everyone else.

“I want to inspire people to take small actions towards a better future. It doesn’t matter how small your step is,” Blair explains. “A small step has as much value as a large step. A million smaller steps can be easier.”

“People are so conditioned to be limited in our goals and views,” she continued. “Until we put ourselves in uncomfortable positions, we don’t know what we’re capable of; I went from no sailing experience to 10 years later holding three world records.

“I really want to show people that you can achieve anything you set your mind to – whether that’s to run a successful business or go on an adventure – to live their dream, whatever it is. Life’s too short not to.”

But until then, Blair will remain here next few months, staying hands-on, overseeing the works at Rivergate.

“I’ll be there every single day. I can do a lot of the work myself, and there’s heaps I need to learn. My boat is like my child; we’ve done 30,000 nautical miles, just me and her.”