Tropical Cyclone Debbie has left a path of destruction along the coastline of Queensland, from Bowen and Hamilton Island to northern NSW.

Cyclone Debbie has left a trail of destruction across Australia’s premier boating destination, the Whitsunday Islands.

The Category 4 cyclone smashed its way ashore between Airlie Beach and Bowen on Tuesday, packing winds up to 263 kilometres an hour – the strongest ever recorded in Queensland – and massive eight metre waves offshore.

Airlie Beach, the gateway to the Whitsundays is a disaster zone. There is substantial damage to infrastructure at the Port of Airlie, but just how badly and how long that will restrict port operations is unclear.

Australia’s second biggest ferry terminal, Shute Harbour east of Airlie Beach, has been affected, with piers pushed onto the bank while a number of vessels, large and small, have run aground. 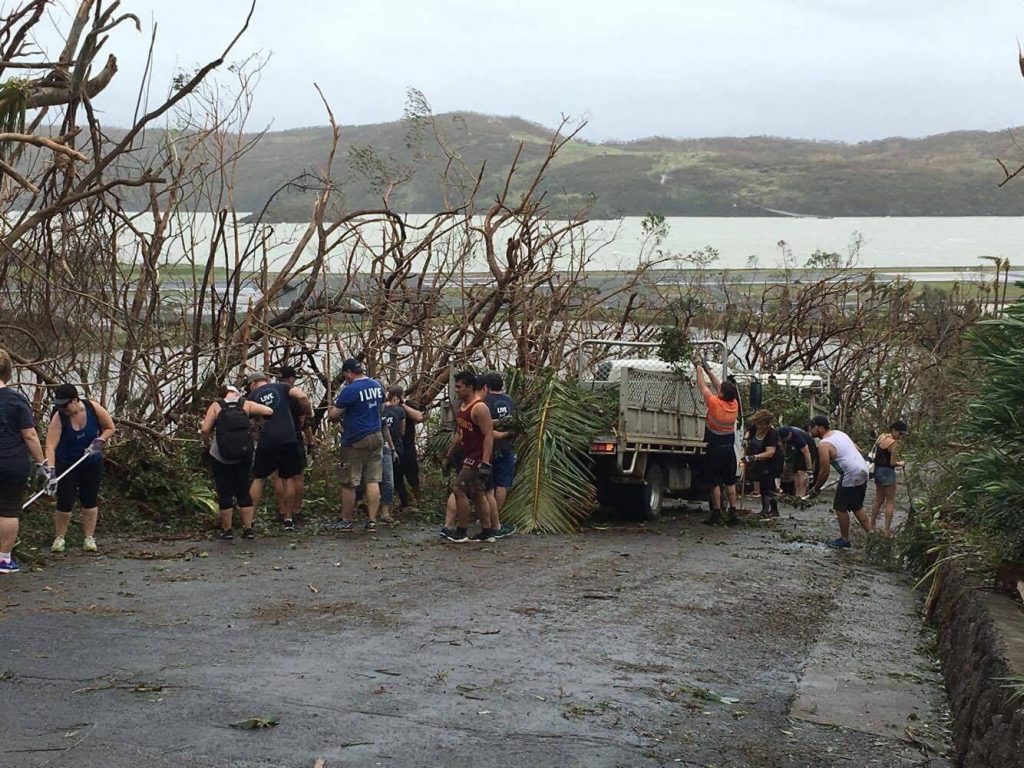 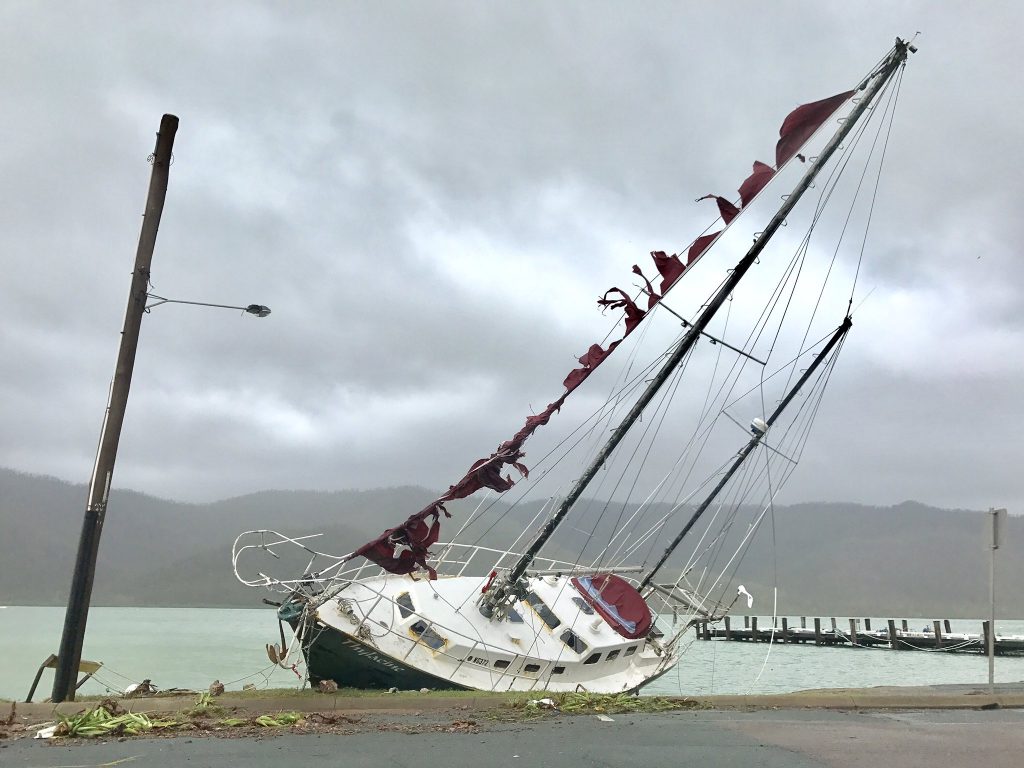 “This is millions of dollars worth of infrastructure,” said Shute Harbour boat owner James Wighton in an interview with AAP after losing his trimaran in the cyclone.

The marina serves as the gateway to Queensland’s Whitsunday Islands, including Hamilton Island.

Those watching Debbie’s fury unleashed via coastal cameras counted dozens boats and yachts torn from their moorings and adrift. But the final number of destroyed and damaged power craft and sailing yachts could be much higher.

Photographs from the scene reveal at least five yachts lying on breakwalls at Shute Harbour, while a further three or four yachts were washed-up on the beach.

Attempts to accurately survey the damage In and around Airlie Beach are progressing slowly, as many roads remain closed, and the still powerful remnants of the Debbie system buffet communities. 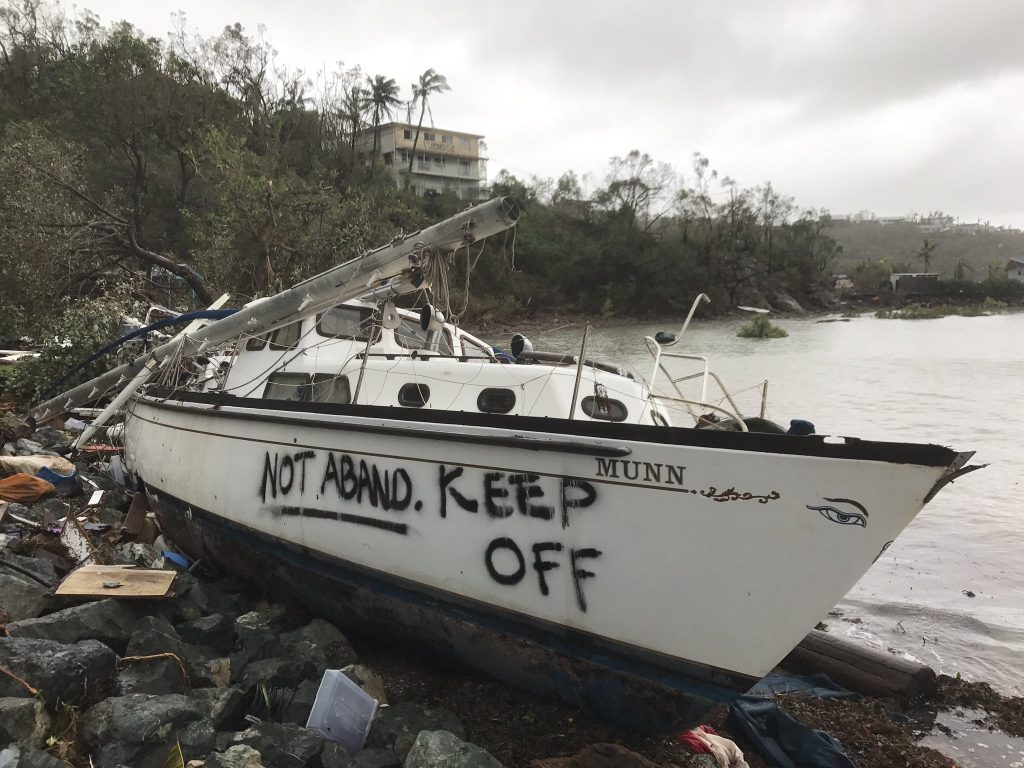 While the worst is over, the Central Queensland region expects a further 400 millimetres of rainfall over the coming week.
Should boat owners need to make a claim, or require assistance with a damaged vessel, please contact Club Marine at either 1300 00 CLUB or at www.clubmarine.com.au/claims.
At Hamilton Island, which was smashed by wind gusts topping 260 kilometres an hour the full extent of the damage is still being assessed. TV footage during the cyclone showed a large power boat drifting between the marina entrance breakwalls out into Dent Passage. At this stage it’s unknown whether it has been recovered.

The main priority for the operators of Hamilton, Daydream and other islands in Debbie’s path has been to ensure guests’ safety, and get them as quickly as possible back to the mainland. That has been hampered by continuing poor weather conditions.

When the immediate emergency has passed, it’s expected to take several weeks to tally the full extent of the damage to marinas in the Whitsundays, and to co-ordinate the large number of insurance claims certain to come in from boat owners and marine related businesses.

But the damage bill from this enormous cyclone is already conservatively estimated to be in the hundreds of millions, could rise further.

South-east Queensland is on full alert for flooding as the tropical low, which was once Debbie, dumps torrential rain across the region, including already saturated coastal areas. The combination of flooding at high tides is a worst case scenario for marina operators on at the mouth of the Brisbane River and on the Gold Coast.

It will be anxious few days for many in the marine industry in South-east Queensland and Northern New South Wales.